One pattern, three garments, and a whole lot of lessons

Last year, after realising that most of the items in my wardrobe weren’t working for me and my postpartum body, I embarked on a mission to fill in the gaps with me-made pieces.

It was not just my body shape that had changed, but also my lifestyle. I no longer work in offices and rarely have a requirement to look smart or formal. I don’t get to socialise a whole lot. I don’t have time to iron ever, but I do get covered in toddler gunk constantly.

The commercial sewing patterns market seems dominated by statement pieces, occasion wear, fitted silhouettes and details like peplums and ruffles – the opposite of what I need. I am aware that I could draft myself some basics, but I’m also quite limited in the time I have available for sewing. I get 30 minutes here and there, usually when I’m tired and don’t really want to think too hard.

I did find a handful of low-cost patterns that had potential, particularly Simplicity 2147 – Mini-Dress, Tunic and Belt. 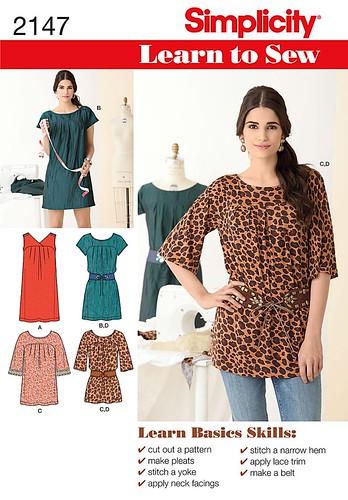 What I like about this – it works at different lengths; with three sleeve options it could carry through different seasons; it’s roomy around the bust and tummy; as a pattern from the ‘Learn to Sew’ range, it should be pretty mindless sewing. I liked the look of the sample so much, I bought some animal print fabric for my first attempt.

Around the time when I hoped to start the project, I came down with a virus and had to take a couple of weeks away from the studio. This turned out to be quite beneficial for my sewing, however, because I spent the time following sewing courses on Bluprint (formerly Craftsy). Particularly helpful was Jenny Rushmore’s class Full Bust Adjustment for Any Pattern.

Last year, when I made the similarly pleated thunder storm top, I did not adjust it and have not been entirely happy with the fit. Although this pattern has a large amount of ease in the bust, and would probably be wearable without a full bust adjustment (FBA), having done the class it seemed like an excellent opportunity to try those techniques out. Doing the FBA enabled me to make a smaller size, better fitting my shoulders. Given the pattern already had a few inches of ease, I decided that adding 2.5cm/an inch each side would be enough just to give it a better shape (my calculations suggest I’d have needed as much as 8-10cm for a fitted garment). I made a toile in muslin to check the fit, I also added a little bit of length distributed in the bodice and hip area, and about 10cm/4″ to the hem. Full details are on my Textillia project page. 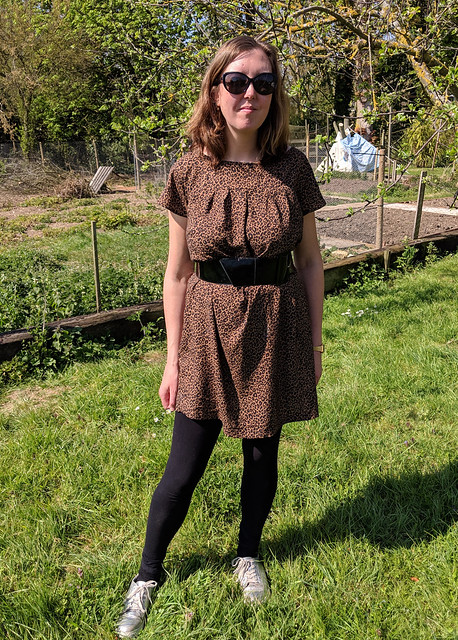 The FBA was pretty successful apart from a little error with the side seams. However, I was so disappointed with the back of the dress, which gaped enormously. It has since settled a bit after a few washes and hangs a bit better, but looks better with a belt. I was pleased that despite the FBA and lengthening, I got the dress out of a 1.5m piece of fabric (the pattern called for 2.2m). 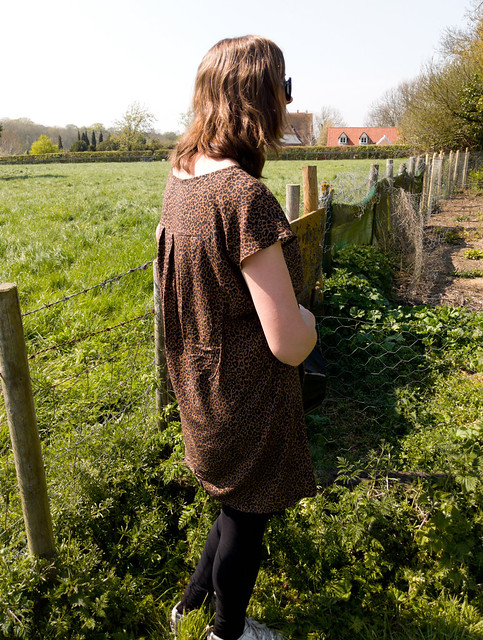 Did I give up and move on? Of course not. I could see the potential, so I went back for another go. This time a top in the most expensive and treasured fabric in my stash, Liberty Silk Satin. Silk might seem like a strange choice given the requirements I stated above, but I actually find silk to be practical for everyday wear. I machine wash it on a delicates programme, and it keeps its shape well without ironing and doesn’t show much wear. It’s also very comfortable.

The fabric is a beautiful Art Nouveau inspired design with poppy flowers, bought to make myself a dress for a friends wedding. It did not get used because I was too burnt out after making the wedding dress! Although the fabric is precious, there was no point in it sitting unused in my stash forever, and I had nothing else in mind for it. 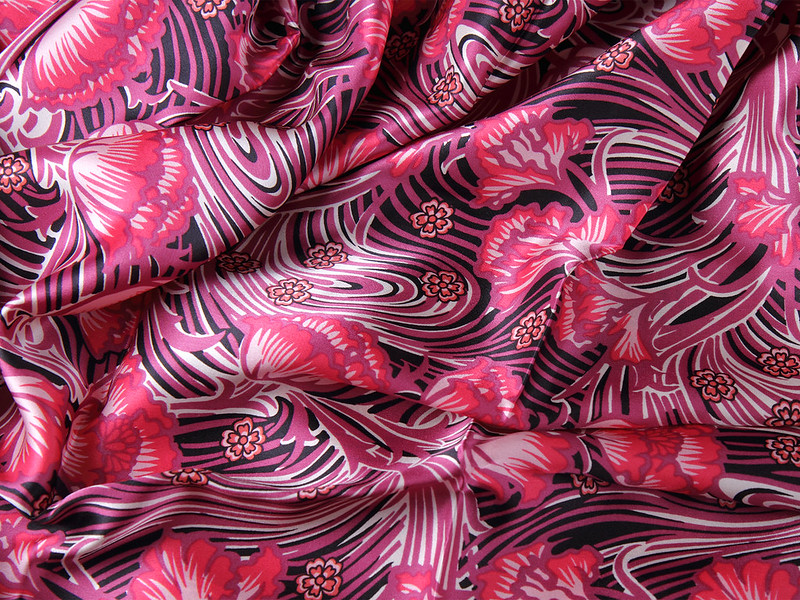 To address the gaping back from #1, I decided to remove four of the six back pleats. I lengthened the yoke by 5mm, just for a little extra room. I raised the dart from my previous version because after extending the yoke, it sat a little low. A toile and a complete pattern redraft later (so much for mindless sewing) I had a new pattern. See project page for full details and mods. 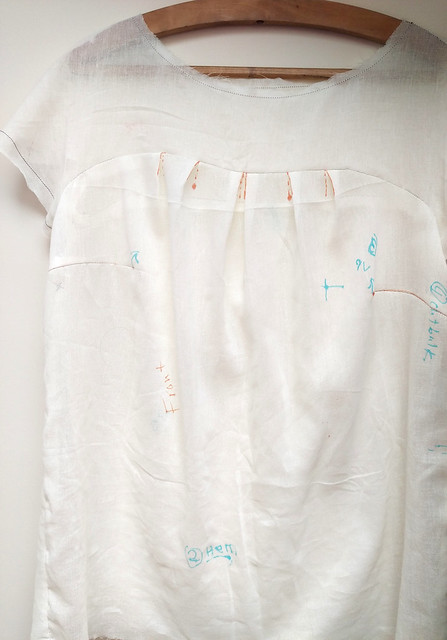 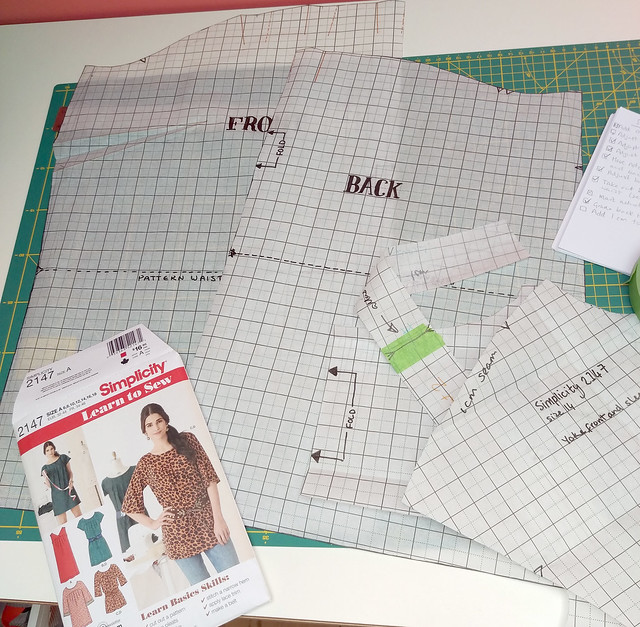 The rest should have been easy, but everything that could have gone wrong did. Firstly, this was my inaugural garment in a large repeat print. Although I had 1.5m of fabric (the same amount I used for an entire dress in the animal print), I ran out and had to put a join in the back yoke. Then there was the fabric itself. I’ve worked with silk a lot, but silk satin was a different matter. The drape behaves nothing like the muslin I used for my toile, flaring out on the bias, which is evident on the sleeves. I tried sleeve facings instead of hems, but that looked even worse. I unpicked them twice and ended up finishing them with bias tape I made (another first for me) from lighter weight silk, but they still don’t look great. Lastly, I messed up the side seams yet again. This time they were even more mismatched than on the first effort. 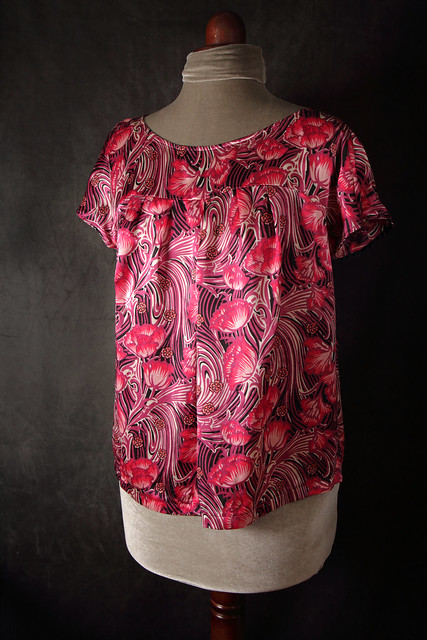 Like many makers, I feel compelled to point out my mistakes, but no one would be able to tell any of this from the garment. It’s acceptable as a nice summer top. The pain was mostly in its making, although the sleeves do still annoy me and it’s still a little too baggy at the back. I am pleased to have finally used this special fabric and accept that it would have been challenging to work with whatever I had made with it.

At this point, most people would have moved on and put the pattern back on the shelf, but not me. I was determined not to be beaten, so I went back for round three.

This time, I had in mind a piece of fabric given to me by my sewing friend Jessica. We both find ourselves with a garment’s worth of leftover fabric after a project, but don’t really want another item in the same print in our wardrobe, so we swap. It’s a good system – nice pieces don’t go to waste. This piece was black and white stripe stretch viscose jersey. ‘Lightweight jersey’ was one of the fabric suggestions for the pattern, and I find myself wearing jersey dresses most of the time, so why not? I also thought that the shape might work well as more of a t-shirt dress, with a ribbed neckband and cuffs.

I redrafted the pattern one more time. I finally managed to draw the side seams right, and I did a better job of removing the back pleats. Pleats are not the same as darts – in this case, the pleat apex was somewhere around the high hip, and not the mid-back as I’d factored by extending the pleat lines. Correcting this mistake from my previous draft removed the excess fabric I had around the back waist in #2. I also made a small adjustment to the shoulder slope in an attempt to correct the flaring sleeves. Full details are on the project page. I made a final toile, and everything looked spot on. What could possibly go wrong? 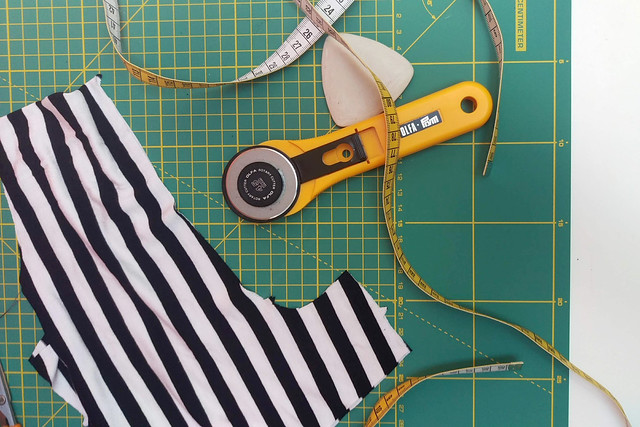 I can hardly believe it, but I ran out of fabric once again, making the rookie error of checking it in the wrong orientation! I only realised after I had finished cutting the front that I did not have enough for the back. I got the details of the original fabric from Jessica but found that it had been discontinued. Even though the fabric looks quite generic, it was not easy to find a substitute. I searched, waited for samples, rejected them, ordered more samples and finally found a non-stretch viscose jersey with the same width stripes, and decided this was close enough. I am happy to report that you can’t tell the difference now that it’s finished.

Most of the construction went off without a hitch on the overlocker, but there were a couple of mishaps. I added transparent elastic to the shoulders to prevent stretching, but it bunched, and I had to cut it out. After adding the neck ribbing I realised that that was probably going to stretch over time, so I sewed some stay tape sewn just inside the seam allowance. I did not consider the placement of the stripes and got a distracting narrow strip of black where the yoke joins the body. I had to unpick this and tuck it in, negating the length adjustment I’d made to the yoke. In doing this, I damaged the fabric (viscose jersey seems a bit delicate) and had to do an invisible repair with fine thread and iron-on interfacing. 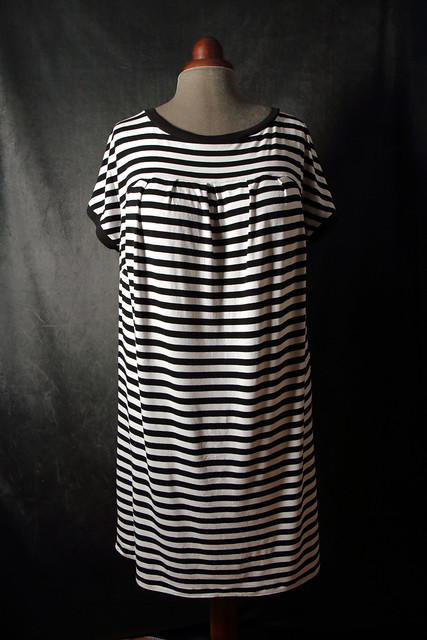 I didn’t quite match the stripes on one of the shoulders but the other looks so good I can overlook it. 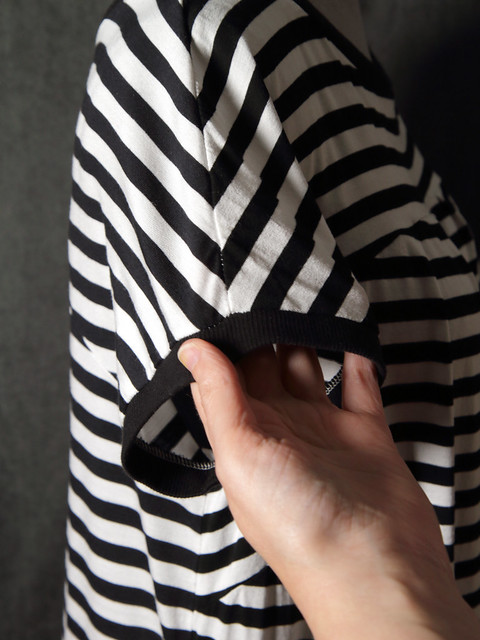 But the biggest issue is that it’s really large. I did not account for the stretch in jersey, and I could have gone one or even two sizes smaller than with woven fabric. Obviously, making a toile in a knit fabric would have highlighted this earlier, but I did not have any knit fabric I would be willing to sacrifice.

Despite the flaws, I absolutely love this dress. The ribbing gives it a sharp, professional finish. With hindsight, I could have done without the front darts and managed the FBA using the existing pleats, but it fits very well and is so easy to wear. 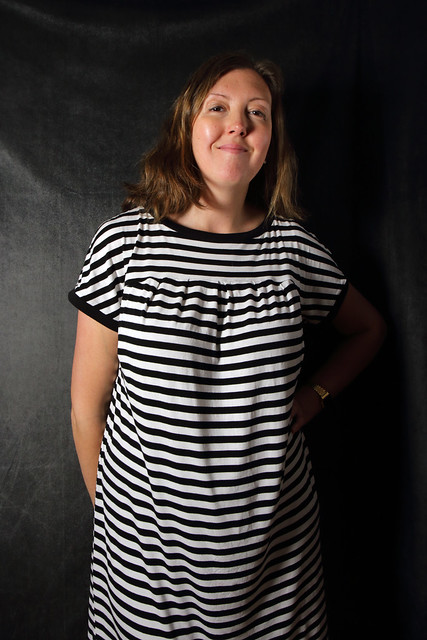 I have learned a huge about working stripes and patterns (I tend to choose plains or abstract prints that don’t need matching) and challenging fabrics. This is the first time I have drafted anything with pleats, and I now have a basic understanding of them. I also feel very confident about tackling an FBA, and will do so without hesitation on every bodice from now on – down with poorly fitting tops! I also have three new garments in regular rotation, and although they follow the same pattern, I don’t feel at all like I am wearing the same thing. Despite their flaws, I like them more than most of the items in my wardrobe.

I put in a lot more work than I ever intended, or that the pattern justifies, and I should really draw a line under it now. Call me foolish, but I am now contemplating a fourth, maybe a top in Tencel denim…?

From the StudioJoin our new destash group