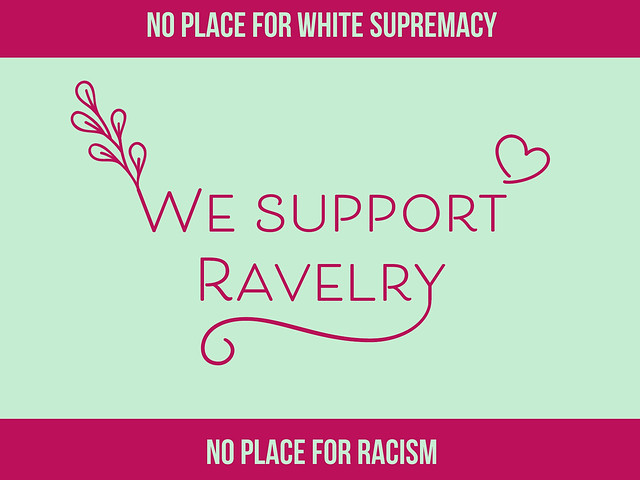 In case you missed it, this week, Ravelry made the decision to ban support for the current US administration (I’m not giving airtime to anyone’s name, and it is bigger than one person anyway) because of its promotion of white supremacy. Ravelry have never shied away from decisive action when it comes to bigotry, having shut down a right-wing group on the platform a few years ago after it descended into hate speech. Ravelry actively support diversity within the knitting community, and have been central in hosting and responding to the discussions about racism within our community that began to reverberate at the start of this year. What’s different about this decision is that the new has spread far beyond the knitting community, being reported mainstream global media, including BBC and The Guardian here in the UK.

The headlines are (of course) a little sensationalist, and may not communicate the subtle distinction that Ravelry has banned open support for, not supporters of the US administration. It is not a ban on Republican political views. They also neglect to report the incident that prompted the decision. An American designer (a person of colour) was subjected to a campaign of abuse and harassment they spoke out about an offensive slogan on a pattern published on the platform. This attack was led by the designer of the offensive pattern (now banned from the platform).

Racism and white supremacy where what prompted Ravelry’s decision and have been the focus of discussions around inclusivity but, at the same time, other marginalised groups have been speaking out about the discrimination they’ve experienced in our community – homophobia, transphobia, ableism and size exclusion – covert, overt and systematic.

We support Ravelry in its action. More importantly, we support the marginalised people within our community and we pledge to take up this fight in our own spaces.

We want you to feel safe and welcome regardless of your ethnicity, heritage, gender, (dis)ability, sexual orientation, body shape or other marginalised identity.

Prompted by these events, we have created a Code of Conduct outlining the behaviour we expect in our online spaces and at our events, and how to report anything problematic.

Why is this necessary?

I used to think that it was enough to simply not be racist, to treat everyone as equals and to be a good person. I used to think that statements like the one above were preformative or even self-serving. I also felt that as the owner of a tiny business with a very modest following, I would not have influence and there was nothing that my voice would add.

I learned the extent of and the damage that racism and other kinds of discrimination are doing in our community because brave people spoke up about their experiences. (My friends often talk to me about their experiences of racism in the wider world, so I don’t know why this came as a surprise to me, it was and I’m sorry for that.)

I learned that regardless of how non-racist I am, as I white person I am a beneficiary of racism. I recognised the privilege of never having to worry about losing customers if I share a photo showing my skin colour, or because I have a foreign-sounding name. When I walk into a yarn shop, I can expect to be given appropriate assistance, and not simply directed towards ‘the cheap stuff’ because of my race.

I learned that racism has a ‘safe space’ when the majority stay silent, and that we only begin to tackle it when we (privileged folks) acknowledge it and speak up.

I learned that safe and welcoming spaces don’t happen by chance, are not the default for everyone. How will marginalised people know they are welcome unless we make that clear? And say it loudly, unambiguously and often.

Our priority is to make sure that our online spaces and at our events are inclusive, safe and welcoming for everyone.

To date, we have not had to deal with problematic behaviour within our spaces (other than the continuous torrent of spam and one bizarre incident where someone took issue with my appearance). Although we would have never permitted hate speech of any kind, we had no formal policy in place to help everyone feel safe and to clarify what you can expect from us and other members of our community. It surprised me 25 of our Instagram followers left after we declared we would not tolerate hate speech or white supremacy, which demonstrates how necessary it was.

I want to think that it’s unlikely that anyone in our audience would respond defensively; that privileged folks are already following the discussions around inclusivity and have begin to unpick their own assumptions and unconscious bias. However, not everyone uses social media or is able to follow the real-time conversations that began and continue on Instagram stories (for a start, the medium is not accessible for people using assistive technologies), and it is unfair to assume everyone is aware of everything that’s happened and every nuance.

Regardless of how much you have been able to follow or engage with discussions so far, it is fair to assume that you want to do the right thing.

Whenever we discuss diversity (and lack of) in the knitting community, particularly when we discuss racism, the same responses come up time and time again in an attempt to shut down the conversion. Sometimes this is well-intentioned but the end result is the same as if it were a function of racist intent – to suppress the voices of marginalised people and perpetuate the problem.

If you are a white, heterosexual, cis, able-bodied person and you don’t accept that you are privileged, or if our statements leave you feeling uncomfortable or defensive, I ask that you read this post explaining privilege before responding.

In the unlikely event that you still feel the urge to launch into a “But… what about me?” kind of statement, or more likely, you see one out in the wild, I’ve responded to these below.

But I want to keep politics out of my hobby / Can’t we get back to knitting? / Can’t we all just be nice to each other?

You don’t want knitting to be political? We’re sorry to break it to you but knitting was already political. The act of making your own clothes is political. Choosing to buy yarn from an independent dyer is a political statement, a rejection of capitalism at least on some level.

Oh… it’s the other kind of politics you don’t want here. You should probably take that up with the people who brought prejudice and discrimination into our community. These conversations began because some people weren’t being nice. Asking others to remain silent is being complicit, encouraging that toxic behaviour to continue.

But I’m not in the US / I don’t use Ravelry. What does this have to do with me?

Although in the UK we have a very different racial and political backdrop to the US, the politics of fear and division have become part of the daily news cycle here too. We’ve seen a huge increase in Islamophobia, xenophobia and transphobia and people who previously felt at home have now been made to feel unsafe and unwelcome.

In 2015, British politician Jo Cox was murdered by a neo-nazi because of her open support of multiculturalism. We rarely call our own nationalist extremism ‘white supremacy’ because that’s the preserve of sinister cults in white sheets, right? Nope. White supremacy has found a home on our shores. This is our problem too.

This is about standing up for the marginalised people within our community, and this applies anywhere.

But what about my freedom of speech?

Free speech doesn’t necessarily mean what you think it means. Here in the UK ‘free speech’ is subject to libel laws, the Official Secrets Act, data protection and privacy laws, and sever criminal statutes covering hate speech and harassment. The UN’s Universal Declaration of Human Rights was amended in 1976 to state that the rights of Freedom of Speech are accompanied by “special duties and responsibilities” and may “subject to certain restrictions…[f]or respect of the rights or reputation of others” or “[f]or the protection of national security or of public order (order public), or of public health or morals”. Freedom of Speech is intended to protect folks criticising the government (i.e. exactly what Ravelry is doing). Freedom of speech is doesn’t exempt you from the consequences of expressing your views. These might include be anything from people disliking you and not wanting to hang out with you anymore, to being banned from a platform or even being prosecuted. Everyone can stand on a street corner and exercise their free speech (within the above caveats) but no one has to stop and listen, provide a soapbox, megaphone, or an online platform for that matter – they are free to start their own.

We are continuing to refine our Code of Conduct (it is still a little rough around the edges), and are in the process of making sure it is visible and linked from everywhere it needs to be. We welcome feedback on its content and implementation.

We are learning too. When I started blogging here just over 10 years ago, my understanding of social justice and privilege was limited and I had never heard of microaggressions or ableism, for example. In light of this, we need to take a hard look at our past use content.

We also want to go beyond words, and our own small bubble, and do something more tangible to support marginalised people. There is just so much awful stuff happening, both in the UK and further afield, that it’s difficult to know where to begin. It’s likely we will support Refugee Support EU and RAICES.

If you are a person with a following in the knitting community (however small) and it’s safe for you to do so, I hope you will consider how you can support marginalised people in our community. The graphic above and my words are free for you to use yourself if that is helpful (no credit required). I have deliberately not linked to any BIPOC/BAME or LGBTQ+ folks because of the large amount of hatred may of them have been subjected to for speaking out, and I ask you to do the same (unless you have their permission).

As always, comments are moderated.

The Project RoomOne pattern, three garments, and a whole lot of lessons