After the minor disappointment of my recently completed Cardamom Coffee hat being a little too snug, I still had a hat-shaped hole in my closet and something of a paradox to solve. I have come to realise that I just don’t like wearing hats. I previously thought I didn’t like wearing my beautiful Bohus hat because I regrettably used a cheap, itchy wool for the brim, but my Cardamom Coffee was really soft and yet gave me the same uncomfortable feeling. My mass of hair keeps my head pretty warm most days, but when the temperature drops to around freezing I have to concede that it’s time to cover my noggin. And now, finally, I think I have the right hat in my latest FO. 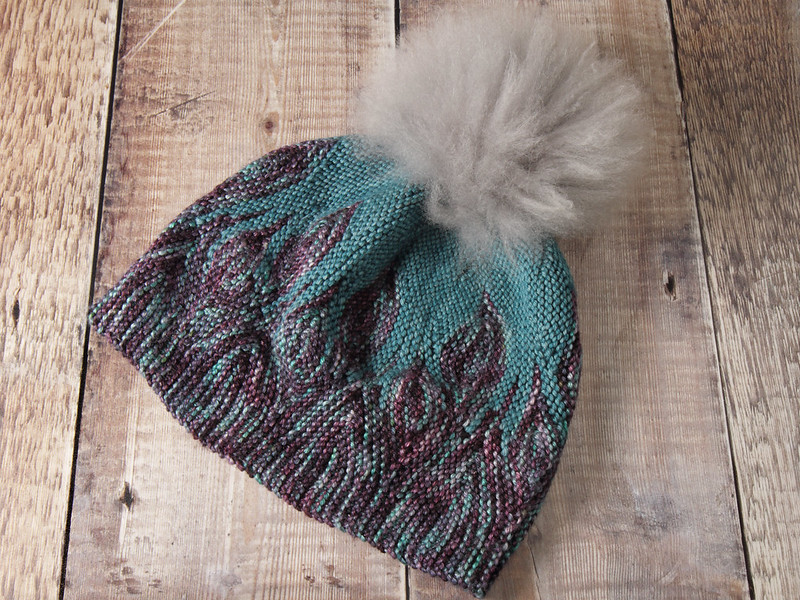 This is Azula by Woolly Wormhead, from Elemental, a collection of five sideways-knit garter stitch hats with ground-breaking short-row colourwork.

After weeks of teasers on Woolly Wormhead’s Instagram feed, I eagerly bought the Elemental collection as soon as it was released, back in September 2017. It took me this long to cast on because I struggled to both to choose which of the five designs to knit and what yarn to use.

Woolly Wormhead has spent her career designing hats and only hats, exploring, innovating and extending our understanding of headwear construction and shaping. I would describe her more of an engineer of hats than a designer of hats, and this is very true of the Elemental collection. Each design in the collection is a distinct and perfectly resolved interpretation of the concept. I eventually settled on Azula because I like that shapes look complex (compared with Katara, Korra and Opal that have line motifs) and there is a good amount of each colour, and let’s face it, everyone else has made Toph and I like to be different.

Looking through the Ravelry projects, I love the way variegated yarns emphasise the curved forms, but too variegated and they get a little lost, not variegated enough and the motifs look more figurative than I want (like actual leaves of flames). I eventually cast on with my Lustre Blend handspun and the striking Mahoodly DK I picked up at Yarnporium, but this one got off to a false start. I thought the red tones would work well together but they were just too different.

Take two. This time I used The Wool Kitchen BFL/Silk DK in ‘Carpo’ (variegated) and Malabrigo Rios (semi-solid turquoise) and this was a winner. Both of these yarns were earmarked for other projects, but that’s the way it goes! 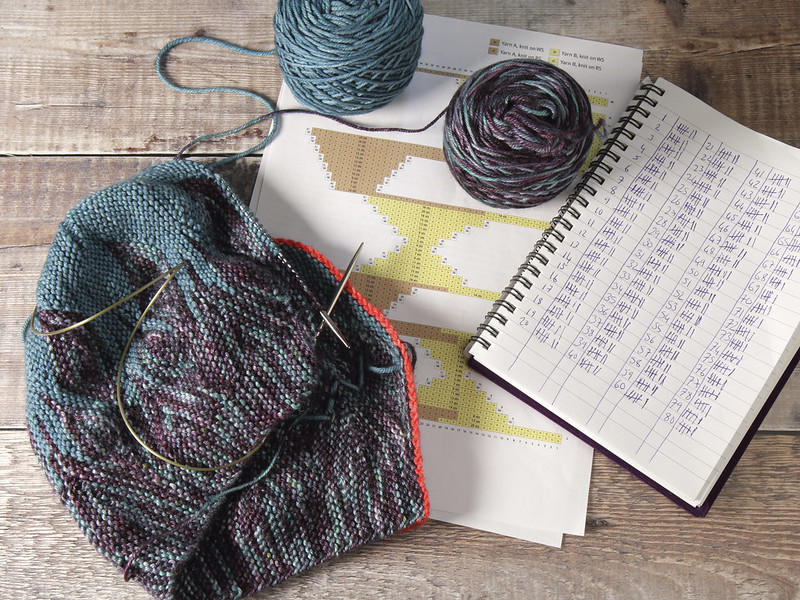 There is a lot to get your teeth into with this pattern – provisional cast-on, German short rows used both for shaping and colourwork, a little intarsia, garter-stitch grafting and vertical floats to carry. The e-book includes very detailed tutorials for short rows and grafting (I can’t comment on whether these are included if purchasing individual designs). Although I have used German short rows before it definitely took me a couple of repeats to feel that I knew what I was doing. Initially I didn’t realise that the end of row stitches (marked with ∞ on the chart) are knitted as regular stitches, and only get special treatment on the following row (where it is omitted from the chart).

Regardless of your experience, you will need some method of keeping track of where you are in the 80-row repeat. A grid of tally marks worked well for me. 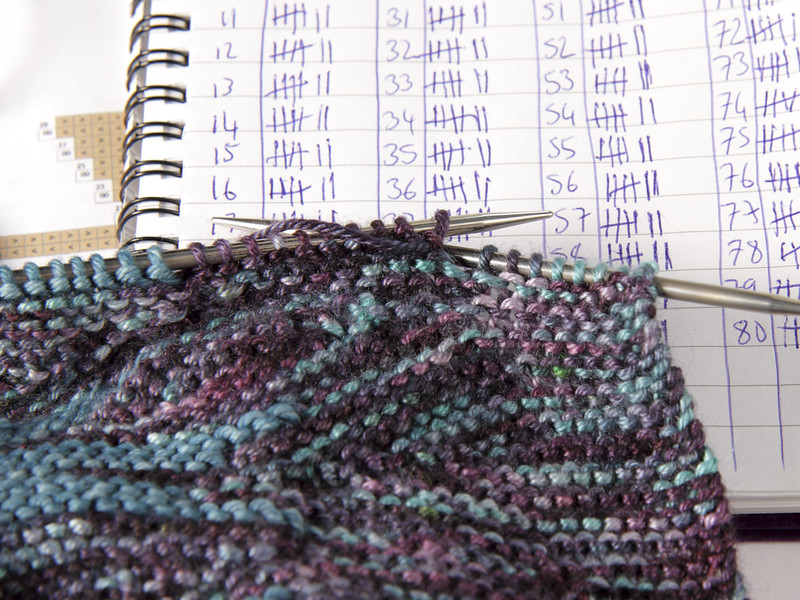 I am really pleased with my final yarn choice, The Wool Kitchen’s ‘Carpo’ shade adds exactly the definition I wanted in these short row shapes. The colours are just beautiful. I have not managed to do them justice in these pictures. Aside: I ended up in a rabbit hole learning about colour profiles and ended up changing my photo-processing workflow in an attempt to reproduce the turquoise accurately on screen. The top photo (with pompom) is the result of the new workflow which best shows the turquoise, but I think the rich aubergines are more true-to-life in these pictures. 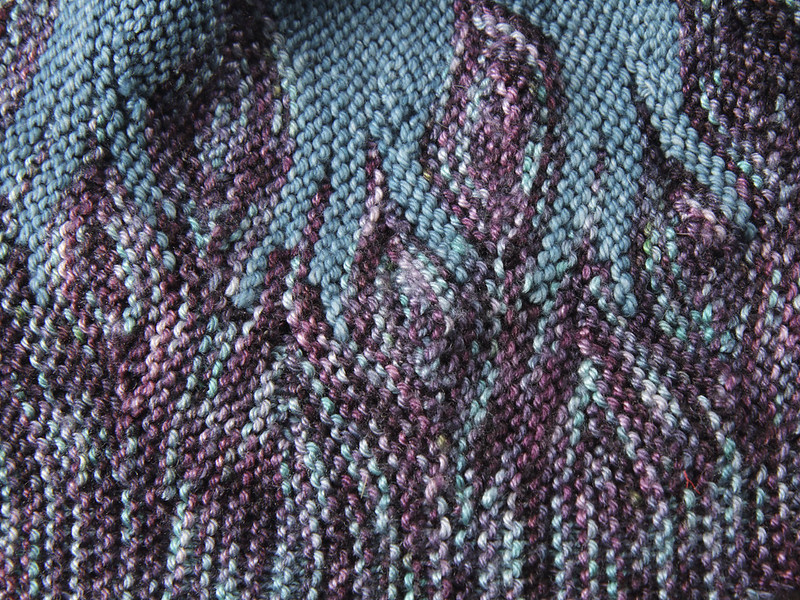 The colours were not only a challenge to photograph, but made it rather tricky to choose a suitable pompom. For now it has a light grey Toft alpaca pom that picks out the silver tones in ‘Carpo’, but I am considering dyeing a pompom for it.

What I like so much about this hat is the fit. Unlike my other hats, when I wear it it doesn’t feel like I have a hat on – I have even worn it around the house. I’m sure I have the silk-blend to thank for its comfort in part, but the shape also helps. It’s a relaxed fit and maybe little bit big for me but it draws in just enough at the brim to feel both secure and comfortable. It’s worth noting that the patterns are written for one size only (for reasons that are obvious when you see how complex they are), so you would need to change gauge to make a smaller or larger version. 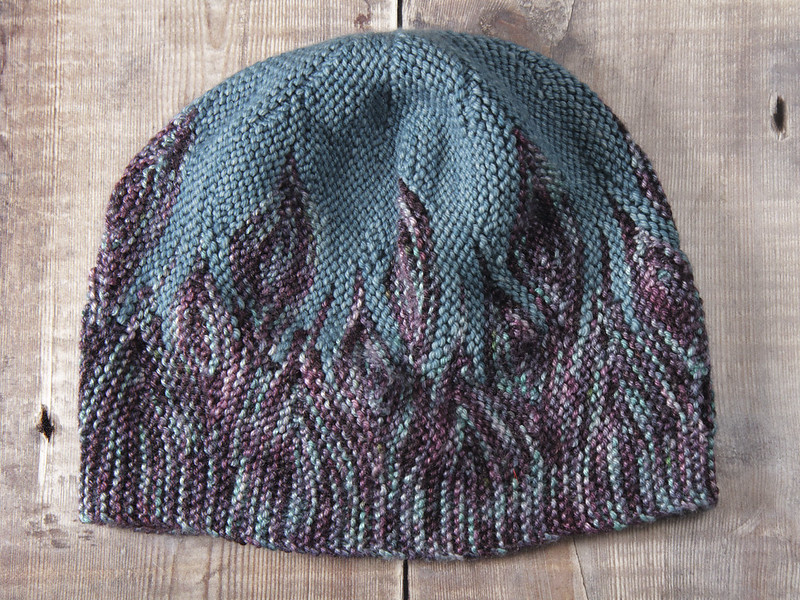 And does it have a shapely crown? Of course it does, no bunching here! I’d expect nothing less from a hat engineer.

I started this project more as a process knit than a product knit, because I was intrigued about the pattern, but the product definitely makes the grade. I look forward to trying out others from the collection, and also Lateralis and Inversion the two new collections of sideways-knit colourwork hats Woolly Wormhead has released since Elemental. I really need to pick up the pace if I have any hope of keeping up with Woolly’s innovations!

Edited to add: Woolly Wormhead added this very timely post about what the Elemental collection has meant to her. If you’re even in doubt about the impact you can have in supporting independent designers, give it a read!

If it hadn't been for the success of the #elementalhats we likely wouldn't have the money to pay for our residency application. So far its cost us €7,000 & we haven't got it yet (but we know now that we will). Once we've got residency & start dealing with the car issues, that's easily gonna jump to €10k or more. ○ If it hadn't been for the success of this collection & the knock-on effect on my business (tho' it's been an incredibly tough act to follow :s), we would have had difficulty proving that I earn enough to apply for residency. The threshold is low in Italy compared to the UK (€12,000 for a family of 3) but now I can prove that I do earn that much, that we're no longer below the poverty line by UK standards. My salary right now is €18,000 which is the highest it's been in nearly a decade & a half – and yup, all that time I've supported my family on that as the sole earner. In fact now I can afford to pay Tom for his video & photography input! ○ I'm feeling very grateful for this today. For your support. For my brain! I am tho' really worried about my mental health. I've had a good run for a couple of years, where I finally seemed to break free from a very deep & dark depression, & that shows in my work. I'm not cured of depression but its manageable & I have my brain back. But I don't want to go back to that place & I'm worried I will; I know myself & I know these feelings. To live with so much uncertainty *again* so soon after facing eviction is something I'll likely never forgive the Brexit vote for. But we are at least still here, with a roof over our heads for now. As much as I don't want to be settled anywhere anytime soon, I can't wait to have residency in hand & to feel safe & secure again for a while. ○ And y'know, there's a couple of good things that have come out of Brexit for us – moving the biz out if the UK to Estonia; getting married; being forced to choose between Italy & the UK & choosing here, this life. As much as it's a nasty bitter pill, I'm looking forward to a life that's not tied to the UK. ○ #brexitescapeplan #beatingtheblackdog #gratitude

From the StudioTips for knitting wool socks that last