It’s been a year since I started the process of decluttering and organising my sewing supplies, prompted by my friend Nadia Arbach’s excellent Declutter and Organise Your Sewing Space podcast (which has just started a new season by the way!). Following the process I discovered not only a ridiculous amount of unwanted fabric (which I destashed raising £175 for Women’s Aid), but a number of UFOs. One of those UFOs has finally become a beautiful finished garment. 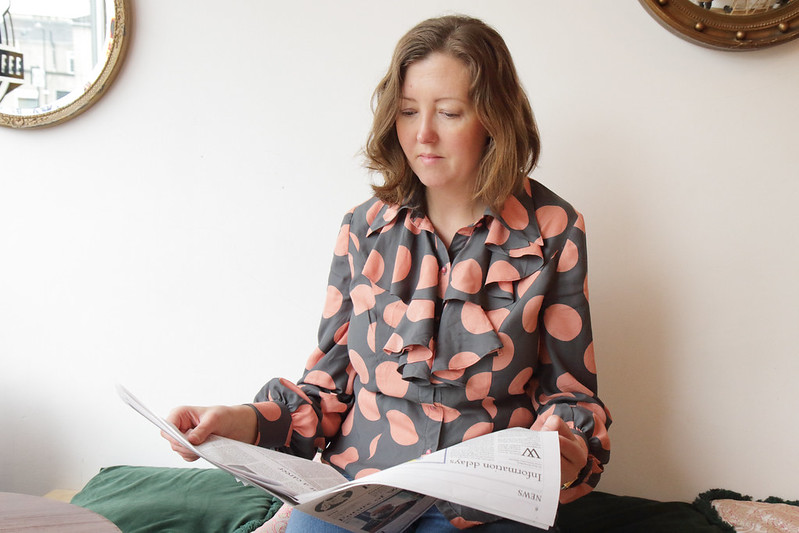 It’s hard to believe this languished for so long (at least 10 years, and we’ll get into the reasons later on). It’s absolutely gorgeous and so ‘me’. 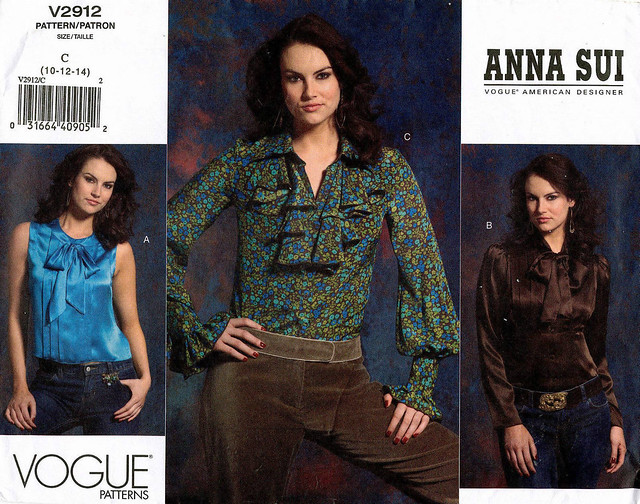 The pattern was published in 2006, and has probably been in my collection since then. There’s a definite 70s/vintage vibe to these statement pieces with the voluminous sleeves, ruffles and bows. I made blouse C (centre), minus the cuff ruffles because I felt would annoy me. I love all three garments and hope to have a go at A and B at some point.

Here’s the finished item on the mannequin. I got impatient and wore it before I had taken a photograph, hence creases. 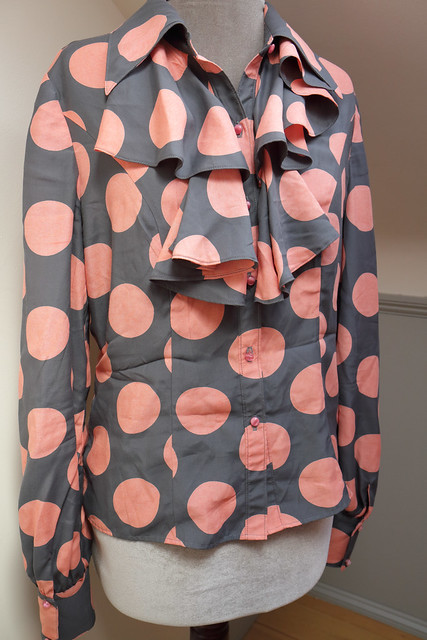 The stunning fabric was vintage, purchased on eBay. I’m not entirely sure what it is but I think it’s synthetic. It has a matte finish and has a lot of drape. It distorts quite a bit when handled which made matching the spots quite difficult, especially as I didn’t have a rotary cutter at the time so I had to use scissors. If I’m honest I probably didn’t try very hard to line it up and it doesn’t bother me at all that it’s not symmetrical.

When I rediscovered the project it had just the body seams sewn and most of the other pieces cut out. It was hard to restart the project after such a long break because I had no idea what mods I had made, or even if it would fit me at all. Thankfully, my past self had had the foresight to lengthen the sleeves because I really hate a sleeve that’s too short. 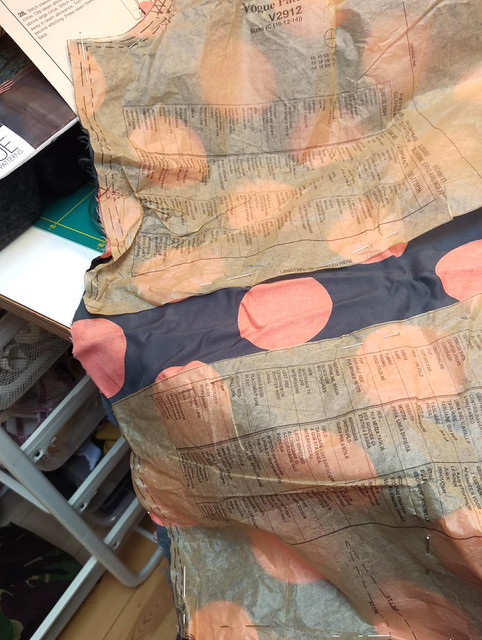 It wasn’t long before I remembered why I stopped working on the blouse, I lost confidence after struggling to get a good finish on those narrow-hemmed ruffles with my old sewing machine. 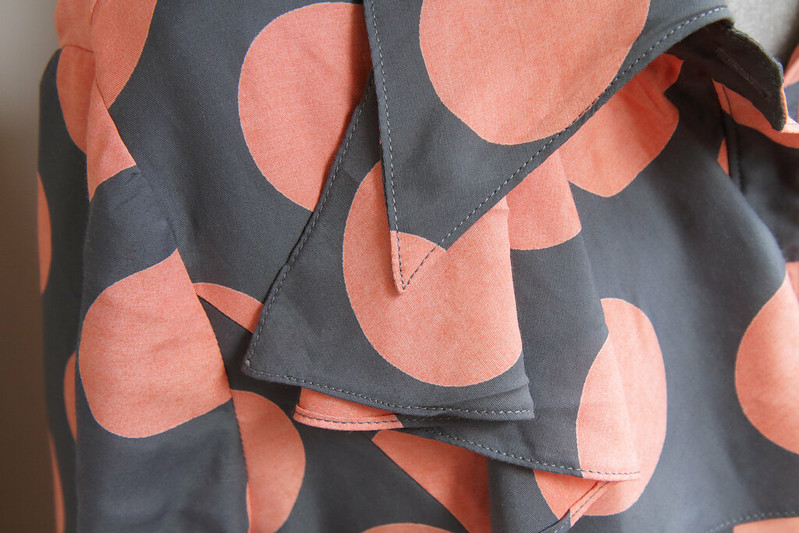 I returned to that part with a new machine and a new attitude, that I would simply try and try again until I got it good enough. I had tonnes of fabric so I could just cut more if it came to it.

I really struggled with the corners, where the machine didn’t have much grip on the fabric. Then I remembered something else I’d discovered during my decluttering and organising… 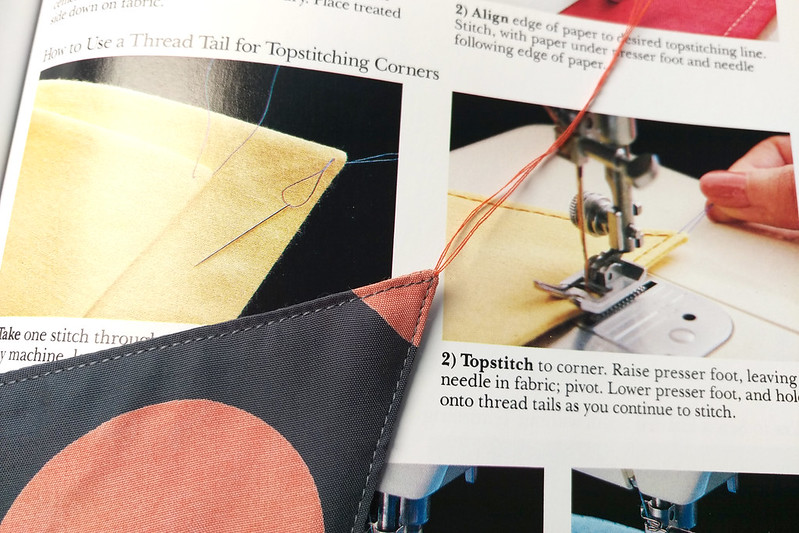 A copy of Singer Sewing Secrets (1989), a book that’s as full of nifty sewing tips as it is of amusingly dated fashion. Sure enough there was a trick to help with the cornering problem – a simple loop of thread that acts as a handle to pull the fabric through the feed.

It’s lucky I discovered this because there was just so much topstitching. 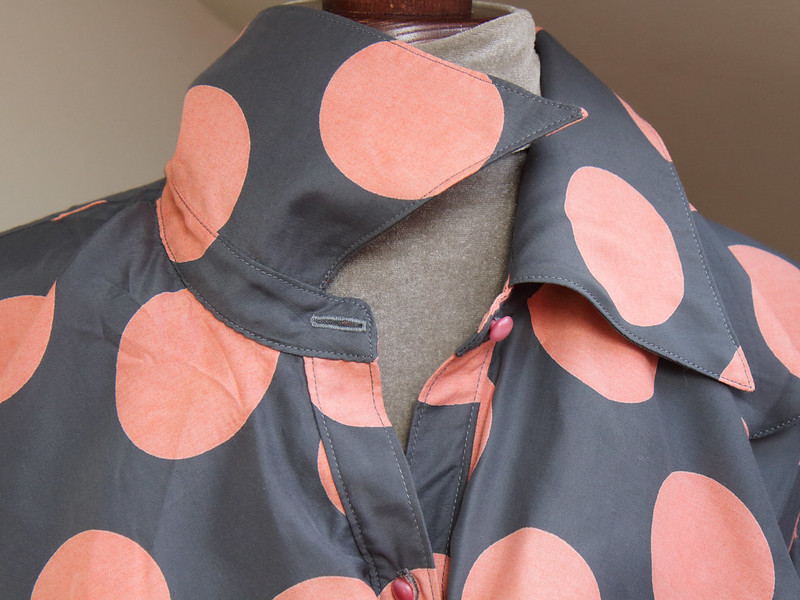 I am very happy with the finish I achieved overall and definitely learned a few things. This was my first time making a shirt collar, a button stand and sleeves with plackets. 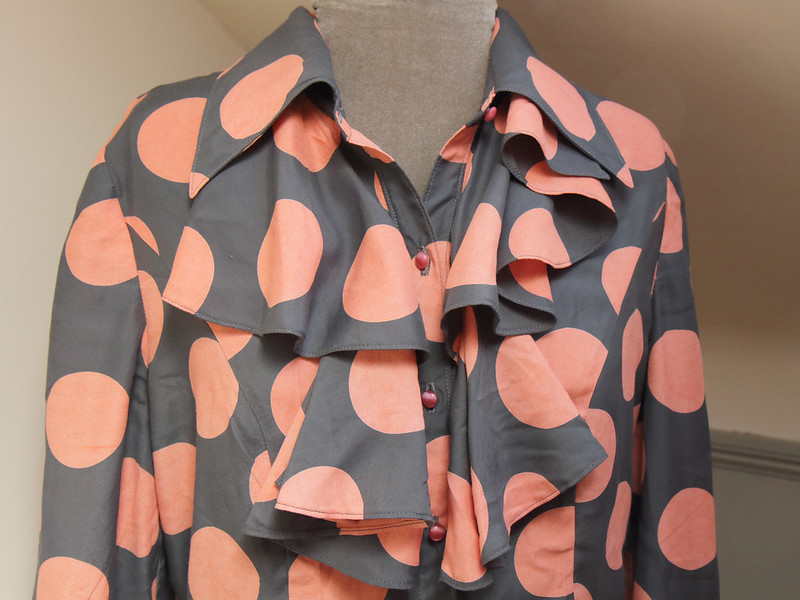 The buttonholes were an absolute dream on the new sewing machine. The buttons were also vintage, bought specifically for the project at the same time as the fabric. Those little pink glass domes just seemed perfect. Unfortunately there were only eight of them. I found some almost-matching buttons with a gold band, but only three of those, so the cuffs are mix-and-match. 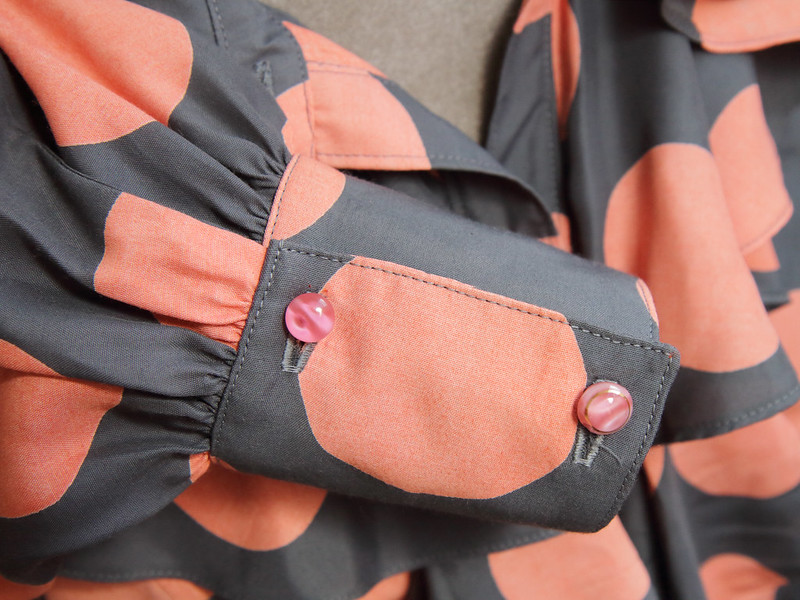 It all adds up to make this a really unique piece that has breathed life into old materials.

I went the extra mile with the finishing and I either did French or taped seams everywhere except the curved joins on the body. As a result, it feels very sturdy to wear, despite the delicate fabric.

The fit is not perfect. It is probably a bit small around the bust and big around the shoulders. When I started this project I had never heard of a full bust adjustment, and anyway an FBA for a princess seams and a button stand would be a lot of work. The princess seams do give the garment more shaping than you would expect from a blouse with darts, and I am just happy to be able to do it up considering I have aged 10 years and gestated a small human in that time. 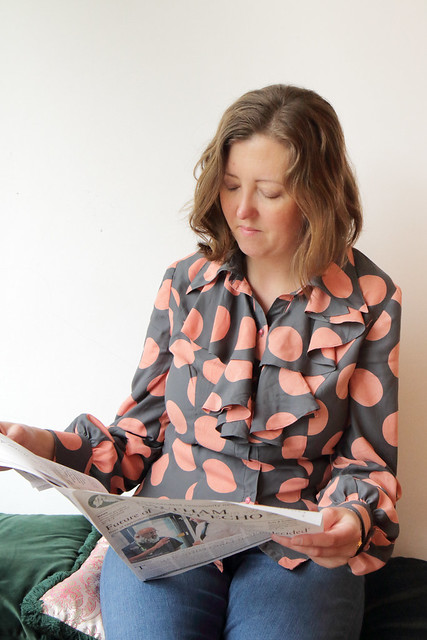 I’ve regained a lot of confidence both with difficult sewing and my ability to see a substantial project through to the end. Although I have a stack of jersey waiting to be turned into toddler PJs and t shirts, I feel like making another garment for myself first. I have my eye the Cookie Zipper Blouson from Waffle Patterns, which could be a great summer jacket, or maybe this Simplicity dress pattern from my stash which I think would also be a summer wardrobe staple.

The Project RoomFO: The Bubble Sweater

From the StudioWe’re in May’s edition of Knitting Magazine!