Here’s the latest of many projects that’ve come off the needles recently in preparation for the arrival of a small person! 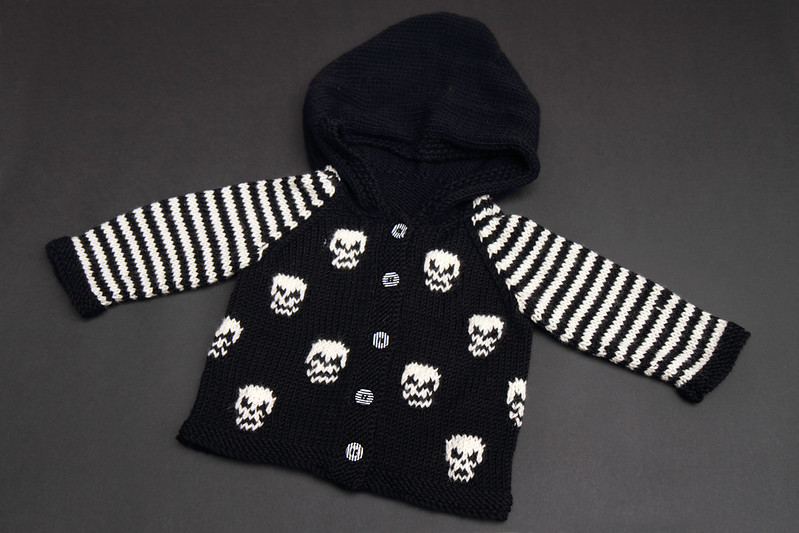 The pattern Hooded skill jacket by Baby Goth Knits. The skull motif requires a combination of Fair Isle and intarsia techniques and although I have a reasonable amount of experience of both I found it really tricky to get them to look neat, but that doesn’t detract from the overall effect. If I were to knit this kind of motif again I would knit as Fair Isle and try out TechKnitting’s ladderback jaquard techniqe for managing long floats.

I ordered a number of different buttons to find some that looked right and settled on these. 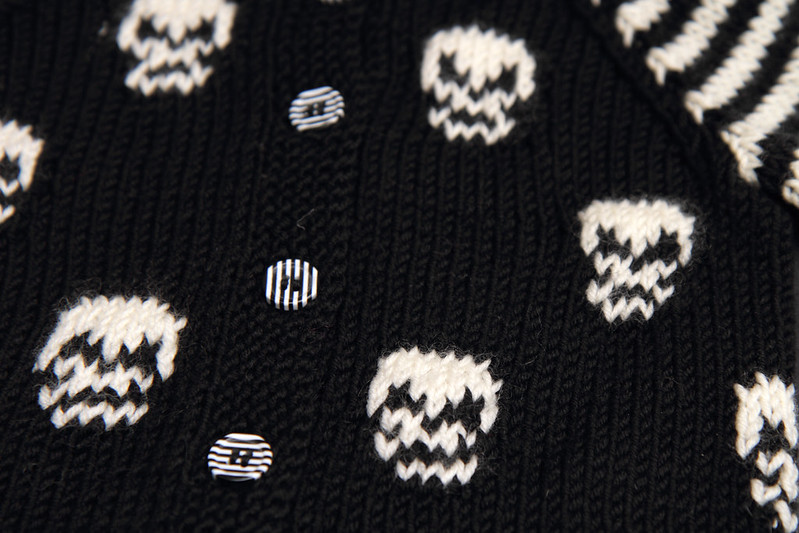 When I’m looking to make something and don’t want to design it myself I always try to support independent designers. Despite the garment turning out super-cute I am sad to say I have a few grievances with this pattern, and I feel like I add this to a lot of recent moaning about the quality of indie designer patterns I’ve purchased. I do this grudgingly and with full knowledge of the hard work that goes into creating and self-publishing a pattern, but there are certain things that a paid-for pattern must get right, such as yardage. Not only did I exceed the yardage for the size I made but I found that the length of yarn needed for each skull was 50% longer than specified, which caused me to have a whole load of annoying extra joins having cut the strands in advance.

The button band is knitted on relatively small needles for the yarn weight, and the buttonholes are YOs. Combined, this leads to really small button holes in relation to the fabric thickness (part of the reason I went through so many button choices). If I were to knit this again I’d use a one-row buttonhole technique instead of YOs.

The armskyes look kind of small. As far as I could tell they aren’t graded appropriately for the garment sizes – a newborn for example would need proportionally wider arms than a 1-year-old – I guess we’ll see when the small person arrives to try it on.

On the positive side, the short-row shaping of the hood works nicely, though I opted for a Kitchener join at the top of the hood rather than a bulky seam.

The quest to produce non-gendered miniature garments will continue!

From the StudioAwesome Aran in the spotlight

The Project RoomSocks of random coincidence