I haven’t done a whole lot of gift knitting this year – my nearest and dearest have quite a lot of knitwear by now, and most of my allocated knitting time is taken up working on pattern development and other projects for the website. But, handmade gifts are important to me. I try to show my appreciation of loved ones with effort over monetary value and avoid the consumerist trap that Christmas can be. Typically means cooking, and I want to share some of my go-to recipes.

Delia’s Almond Biscotti make a superb gift and they’re basically foolproof. The quantities in the recipe are a bit stingy, I normally make double which produces three good-sized bags. 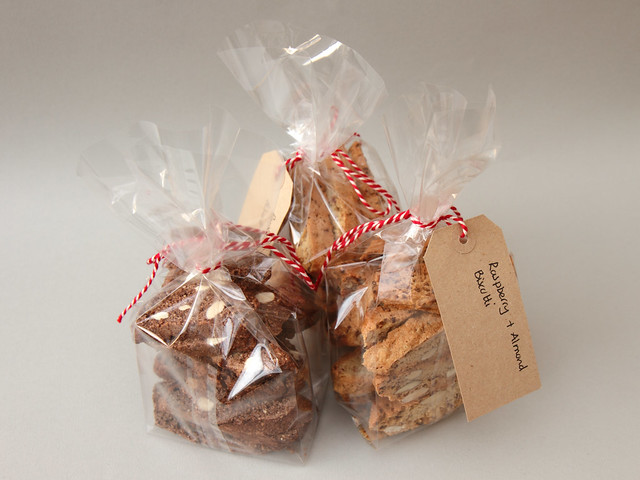 I’ve done a lot of experimentation with flavours, and I recommend these:

Chocolate – per recipe quantity add 12g best quality cocoa powder (these are less than appetising when in progress, you’ll see… but I just took a batch of these out of the oven and they look yum once cooked). 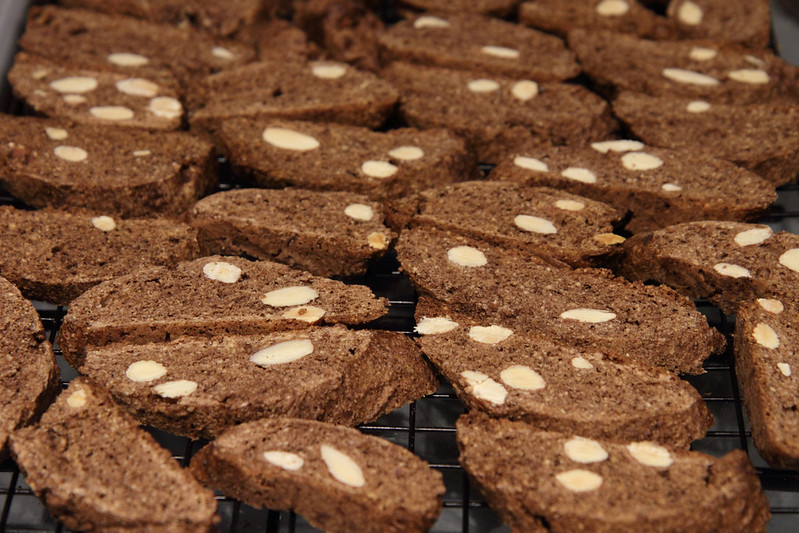 Double chocolate (as before, and sub the almonds for dark chocolate chips

, a brilliant ingredient if you want a fruit flavour without adding any liquid 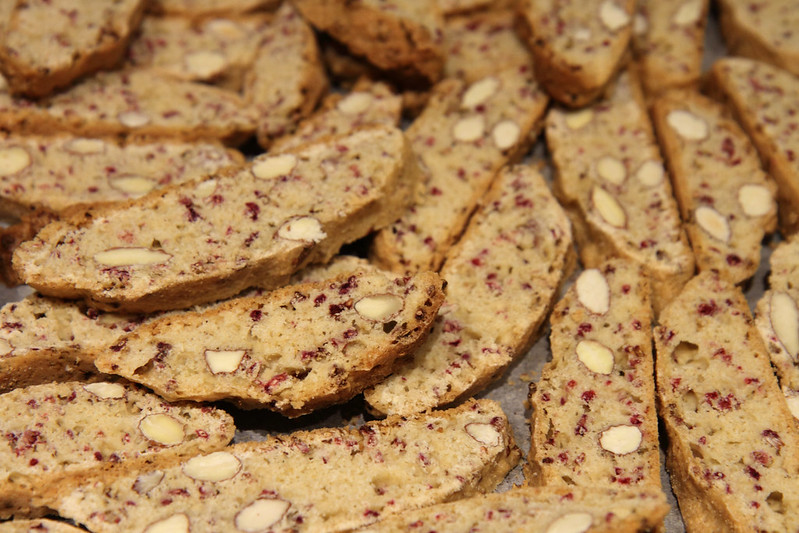 Whisky truffles are normally on the list and I’ve got my own recipe for chocolate truffles with a number of flavour variations. This year I’m skipping them because they need to be made over a series of evenings to give them time to set and I haven’t been organised enough. (Also, some recipients with, shall we say, less adventurous tastes, complain I make them too alcoholic. Can you believe it? This is nonsense, there is less than one shot of spirit in 10 truffles). 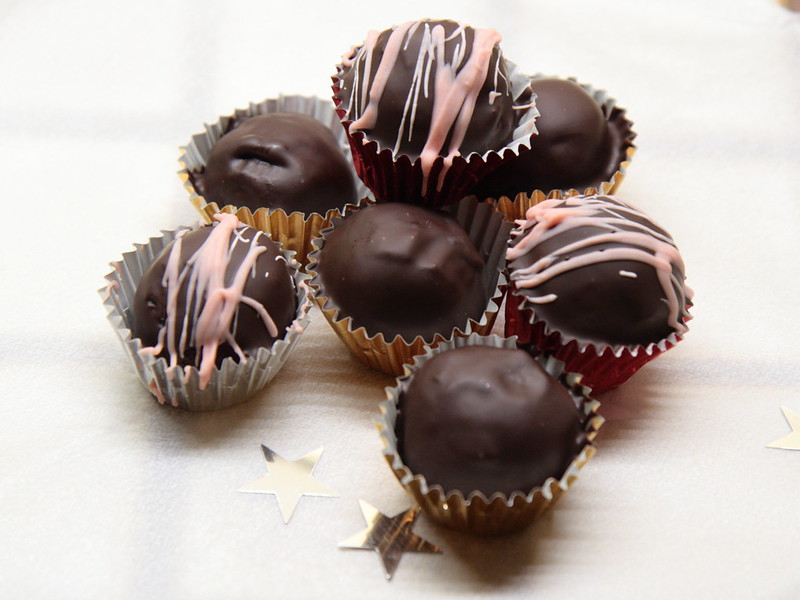 Preserves are featuring heavily in this year’s food hampers. Earlier this year I started a recipe blog, which I then neglected, but not before adding a couple of recipe inventions; Blackberry & Basil Jam and Apricot and Kiwi Jam. It’s not exactly the fruit season but they’re worth trying if, like me, you have a freezer full of local blackberries, or an affordable supply of exotic fruit. 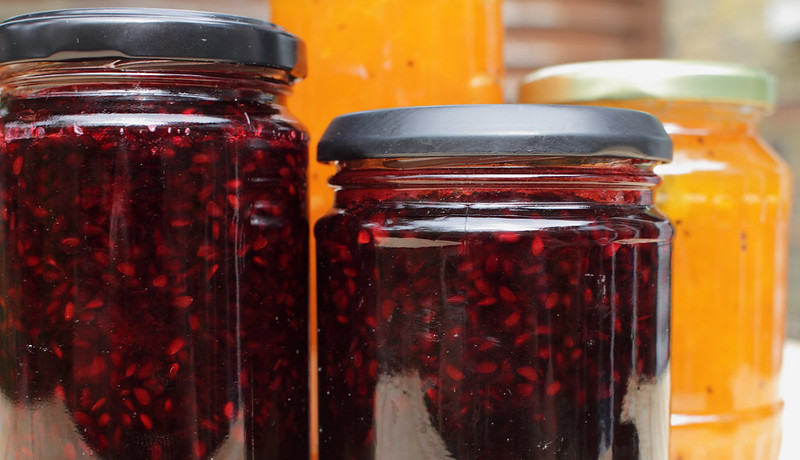 Jam is so easy to make and I’ve made many batches over the last few years, but I never made marmalade until this year. It is a bit more effort as it has two cooking stages and there is all that peel to slice up, but I’ve discovered jam sugar (with added pectin) is a marvellous thing, eliminating the need to extract pectin by boiling the pips. My marmalade recipes are from a trusty edition of the Good Housekeeping Cookbook from the 70s, and all call for Seville oranges, which are hard to come by these days. I make grapefruit marmalade instead – it’s very tangy and sour which is exactly as I like it. For Christmas I made a three-fruit variation (lemons, sweet oranges and grapefruit), with festive spices added (cloves, cinnamon and star anise). It’s sweeter than I’m used to but right for the season, I think.

Chutney is also a favourite. I’ve been using this recipe for beetroot chutney, which is always delicious but seems to turn out very different every time. I recommend not cooking the beetroot first, it keeps its colour better. I also love this recipe for ‘Mocks and Spencer’ carrot chutney, exactly like that found in those delicious M&S Wensleydale sandwiches.

A new and important addition to my Christmas hampers is sloe gin, recipe from the excellent Booze: River Cottage Handbook

. I have never tasted it before let along made any but what a treat! It looks like Ribena and tastes like Amaretto. 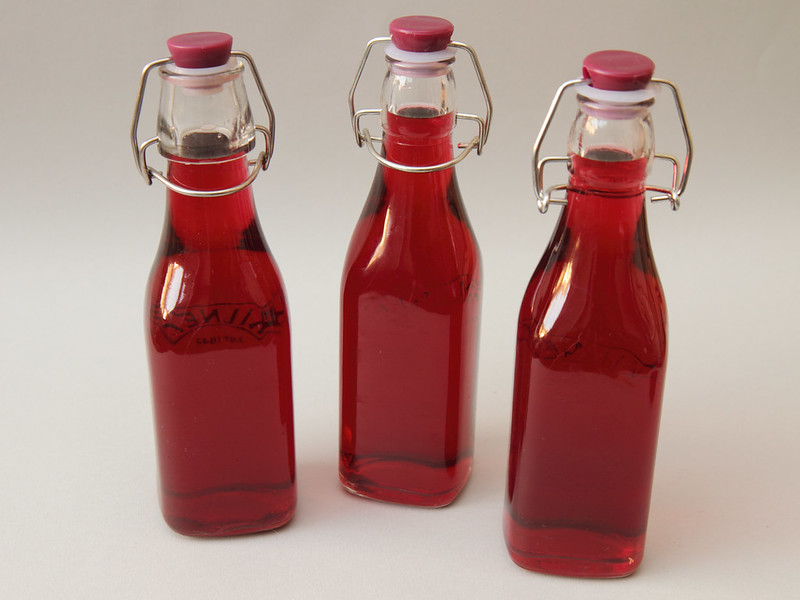 While it’s definitely too late to make any for Christmas (it takes three months to steep), there is still time to pick sloes. A jar of sloe gin in the making would I’m sure be a welcome gift would take just minutes to prepare.

I highly recommend the ‘Booze’ book if you’re interested in home brewing or liqueur making. At It’s a Stitch Up towers we’ve been using its recipes to successfully turn home grown and locally foraged fruit into tasty alcoholic beverages, including blackberry wine and cider.

Whatever you have planned for the festive season, I hope have a wonderful break filled with delicious treats!