With over 80 exhibitors and numerous classes and talks, Unravel is one of the biggest fixtures on the UK yarn calendar. It takes place annually over three days at Farnham Maltings, 1h by train from central London’s Waterloo Station, and is dedicated to yarn, knitting and related crafts. I travelled down on the Saturday with my yarn buddy Therése aka Brixton Purl. Believe it or not, this was my first time visiting this fabled festival, and of course I brought my camera along in order to report back. I can tell you now there was so much to see, of which I barely scratched the surface, so let’s crack on! 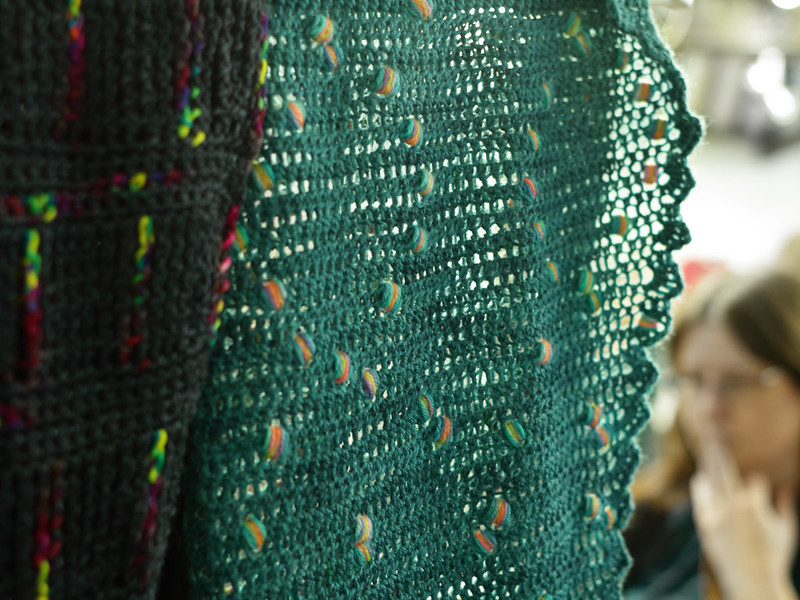 Our first stop was the Barley Room, where I found fellow Walthamstow dyer The Wool Kitchen. On her stand was this sample of the genius Stop, Drop and Pop crochet shawl by Joanne Scrace, which shows off The Wool Kitchen’s M2-9 shade to perfection. 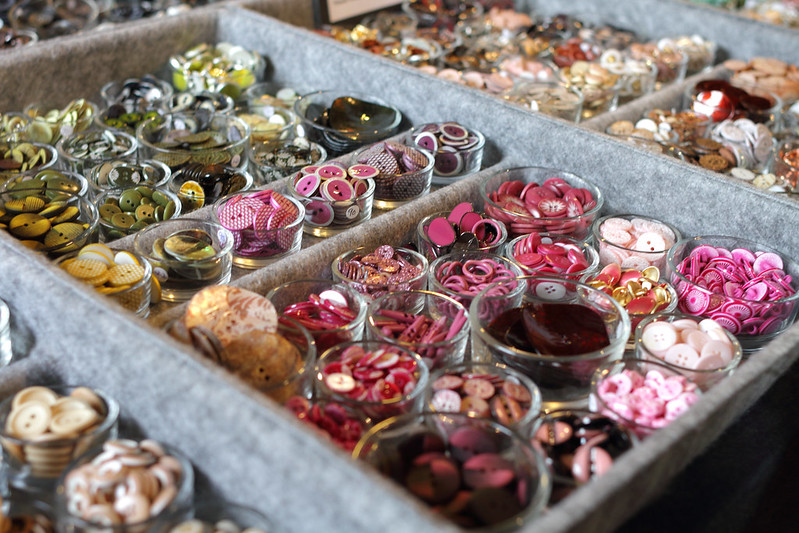 The Textile Garden brought a beautiful spectrum of buttons. 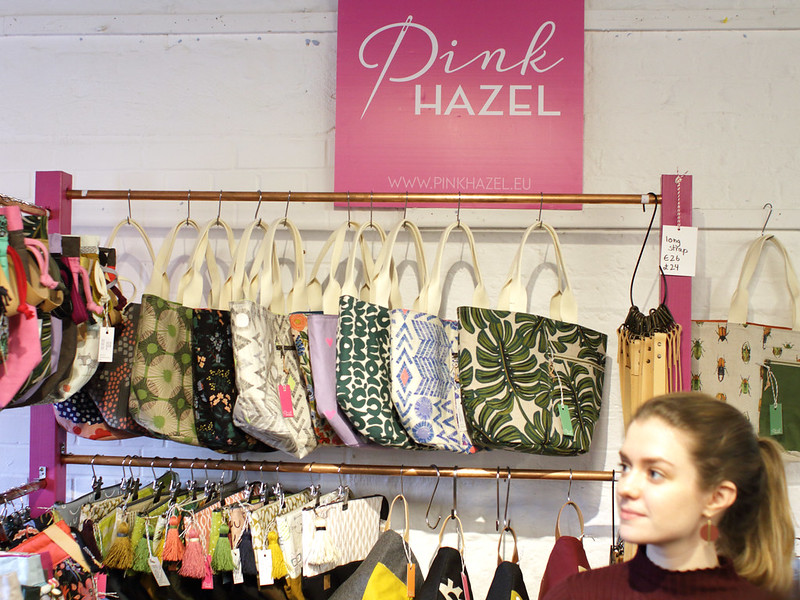 Pink Hazel is a new-to-me maker with a striking range of project bags in contemporary fabrics. 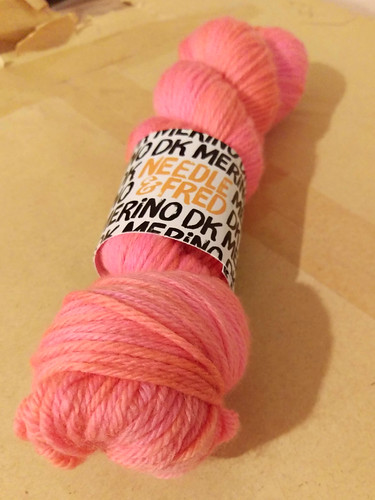 I made my only purchase of the day (yes, really) at another new-to-me stand in the Barley room, Needle & Fred. I was very taken with their colours, and their pun names were also right up my street (I chose “Coral Me Maybe”). I would have taken a better photo of this peachy design but it’s already caked up and being used in a project! 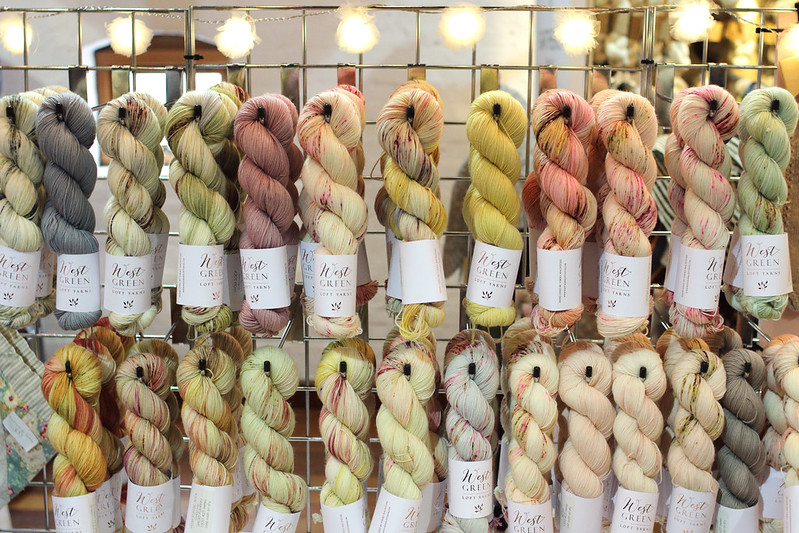 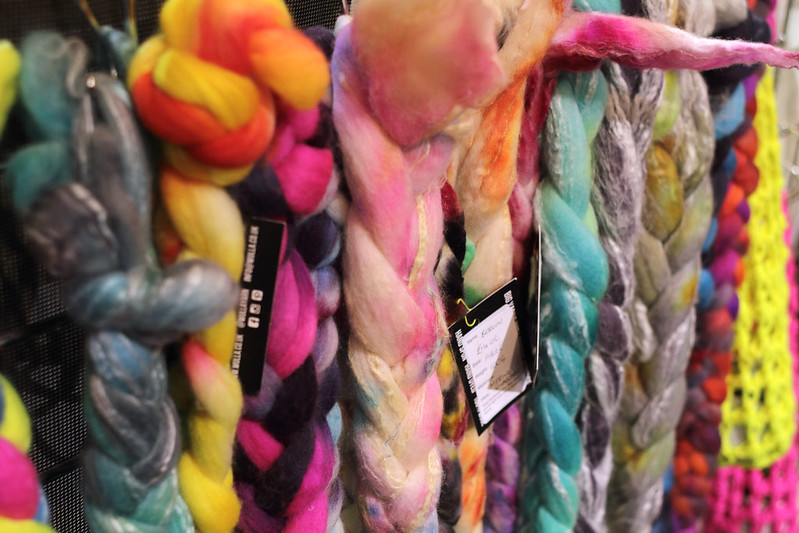 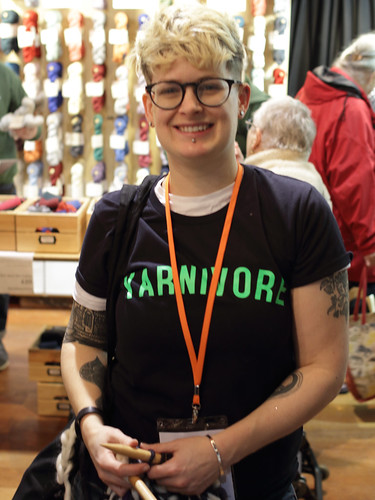 I had the great pleasure of meeting Caz, the talented spinner and dyer behind Wulla, whose unique and vibrant work I’ve long admired. 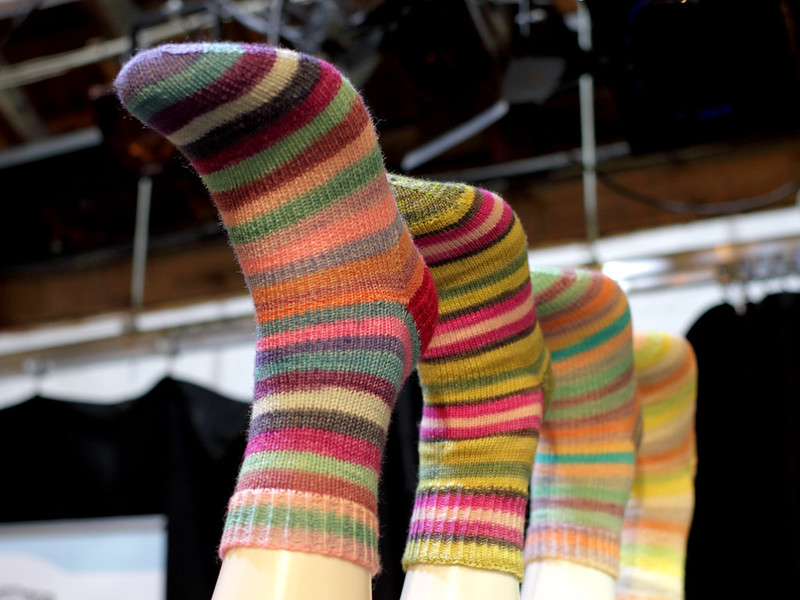 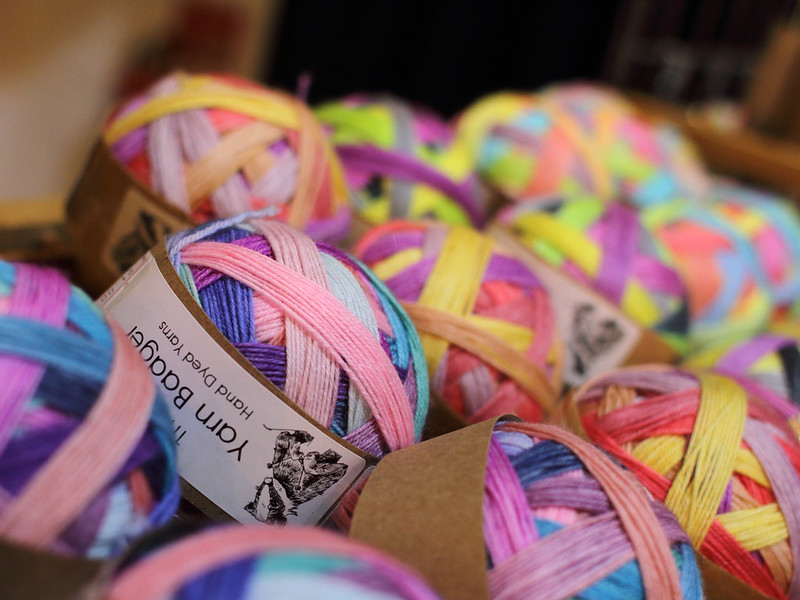 I have ultimate respect for those dyers who offer self-striping yarns, especially those who ball it up by hand, because the work involved is epic! The Yarn Badger is one such dyer discovery. The colours make me think of spring! 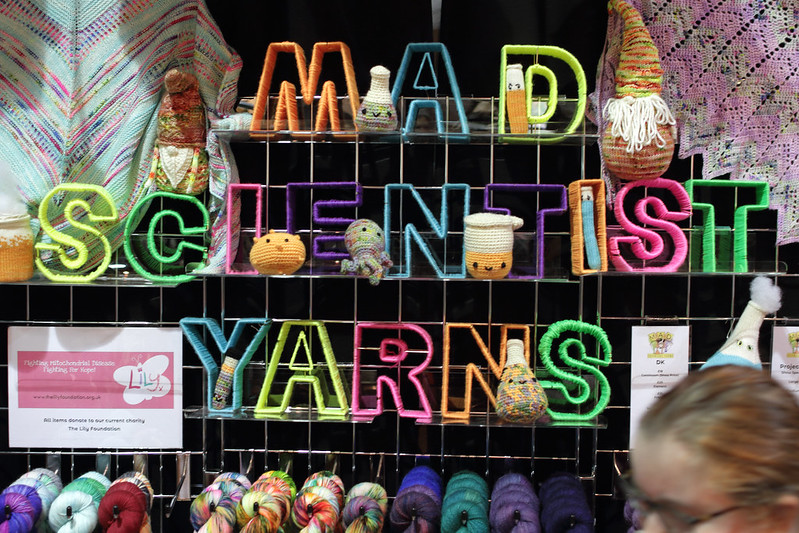 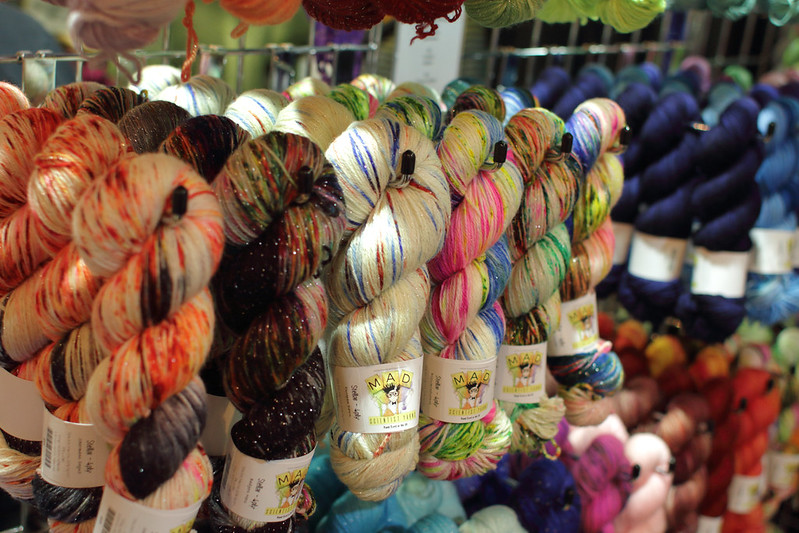 MAD Scientist Yarns was also nestled in the Tindle Studio, whose colour aesthetic is right up my street. 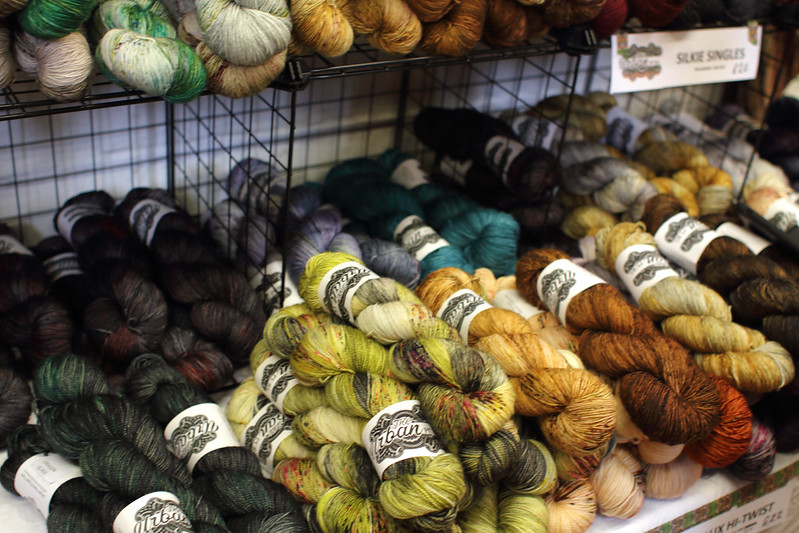 In the Long Kiln Room, The Urban Purl‘s superb speckles were turning heads. 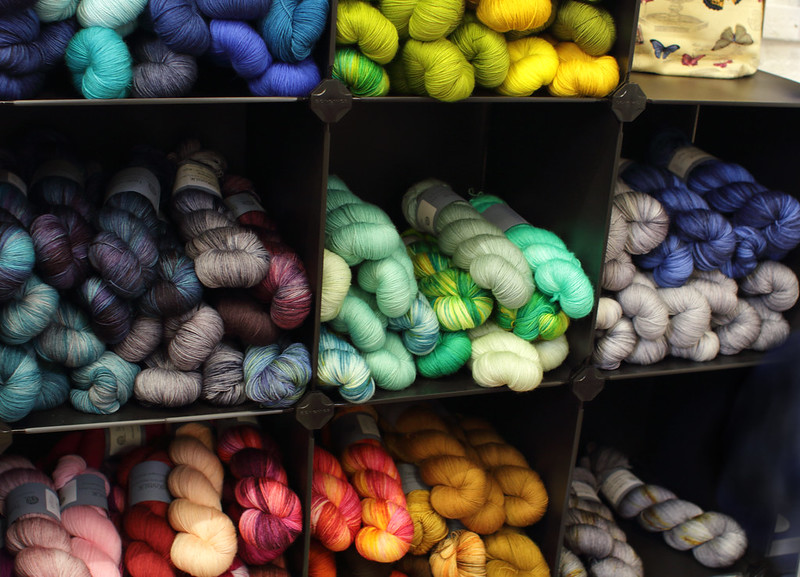 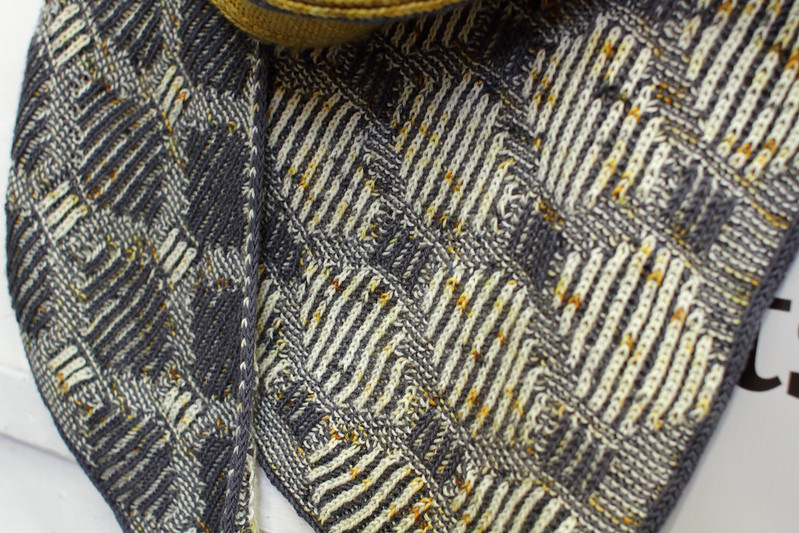 New dyer Ted Knits had a beautifully presented stand with some stunning samples, including this geometric brioche shawl (anyone know the pattern?).

There were two further rooms of exhibitors upstairs, but I found them too crowded to stop and browse. Third Vault Yarns stand was overflowing with gorgeous hand-dyed, which I regret not being able to show you. 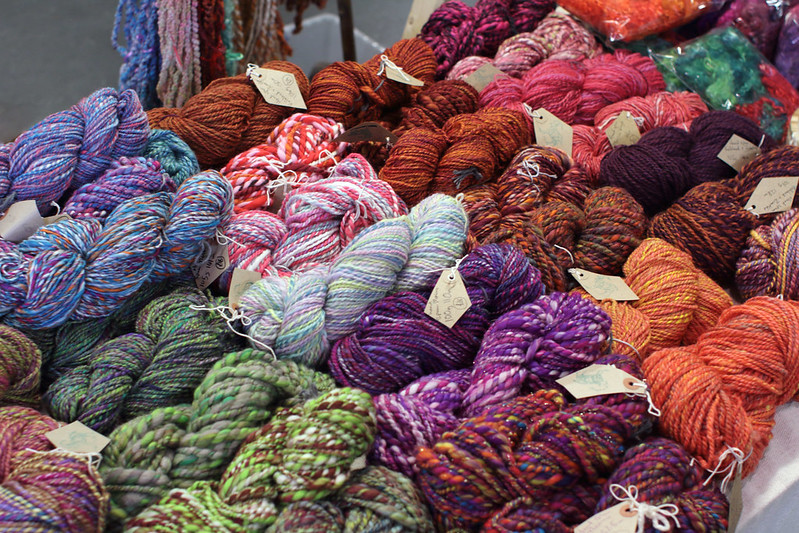 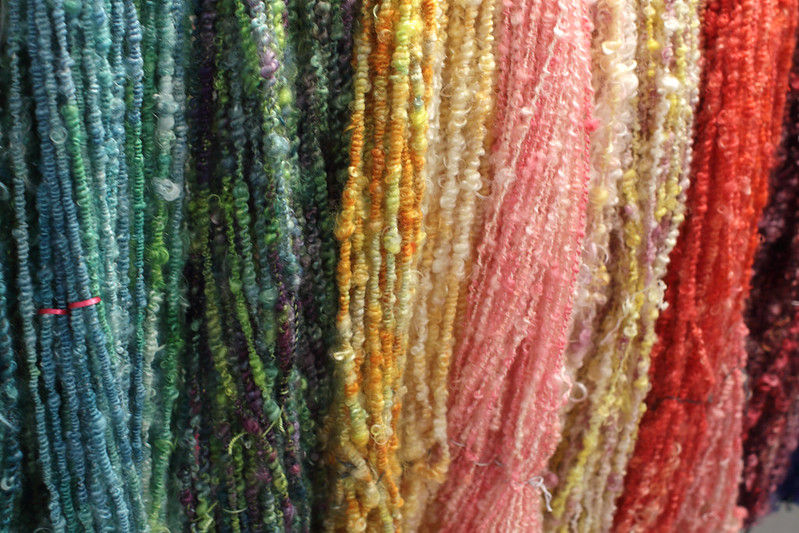 In the Cellar Bar area, it was lovely to see an abundance of handspun from Farm Crafts, including bouncy, chunky wool and glossy, textured mohair. 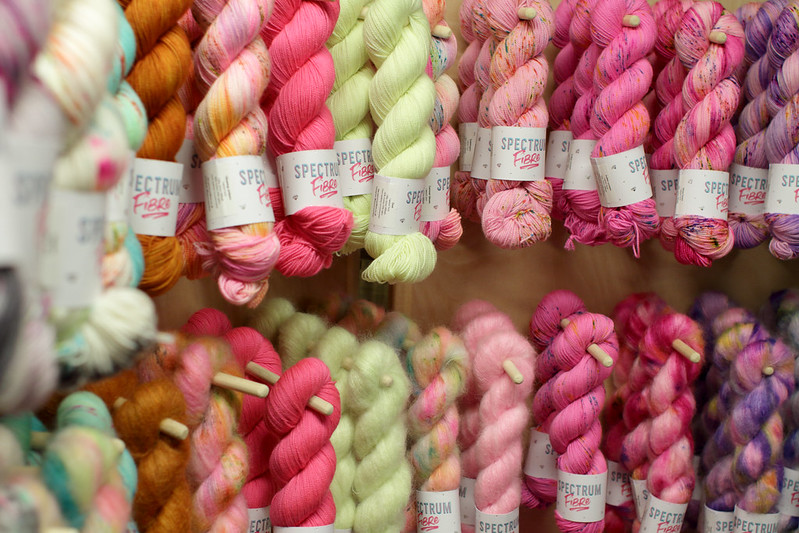 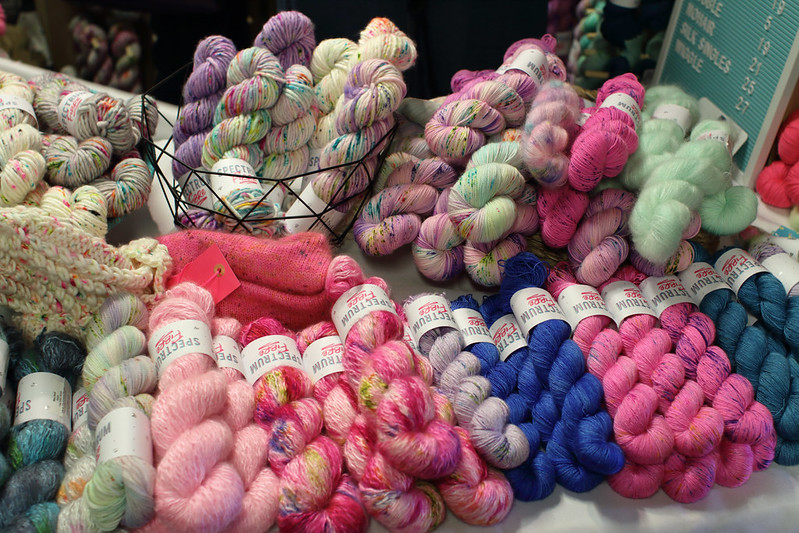 Moving into the Great Hall, again, the crowds made photograph a challenge but there were some great exhibitors to see. 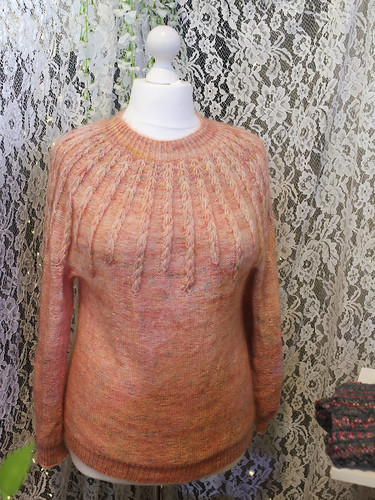 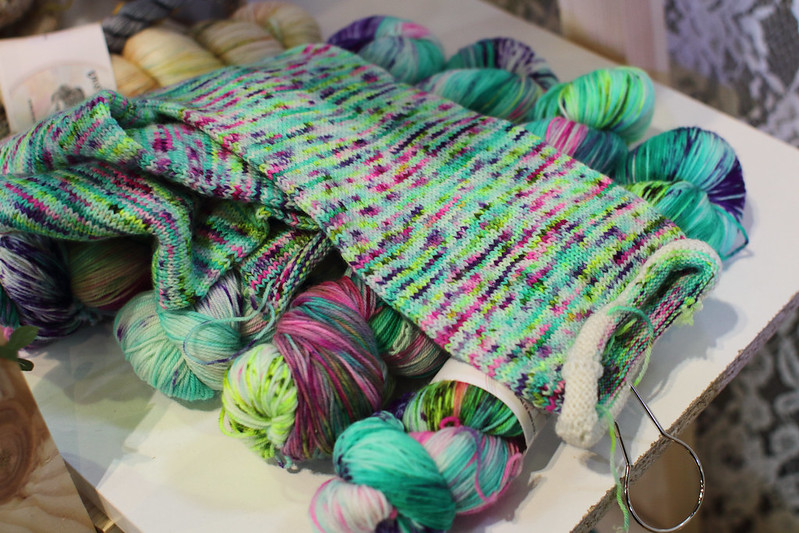 Dusty Dimples stand was so pretty, with a sweet lace backdrop and fairy lights (you’ll have to take my word for it because it was far too popular to get a photo of the whole booth). Wool & Pine’s Sorrel sweater is perfect in their softly heathered peach tones. 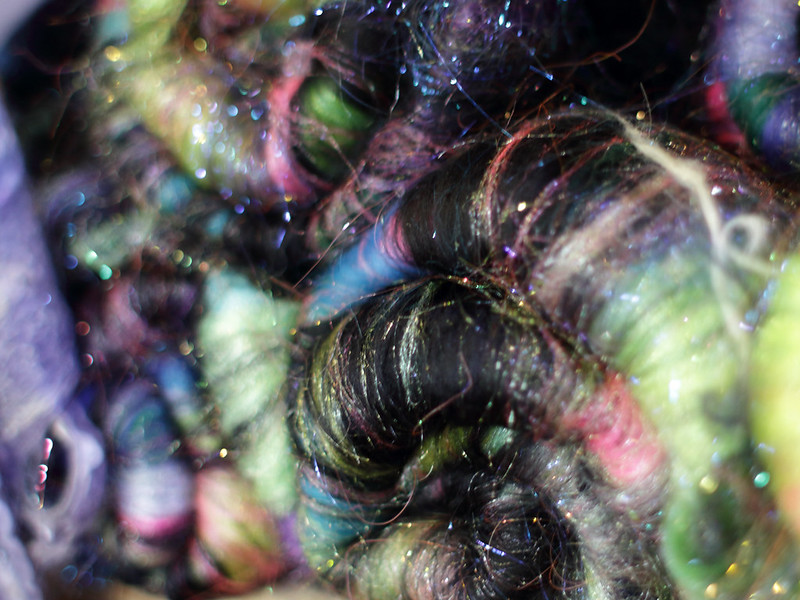 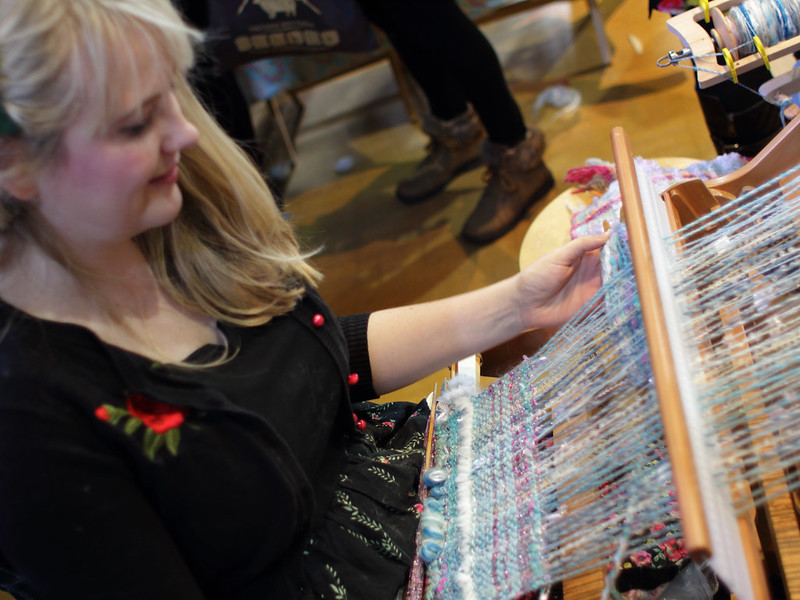 Spin City‘s booth was full of shiny, fluffy temptations as ever. I caught Louise doing a weaving demo inspired by the ‘Winter Palace’ themed spin-along I’m taking part in on her Facebook Group. The way she combines colours and textures is always inspiring. 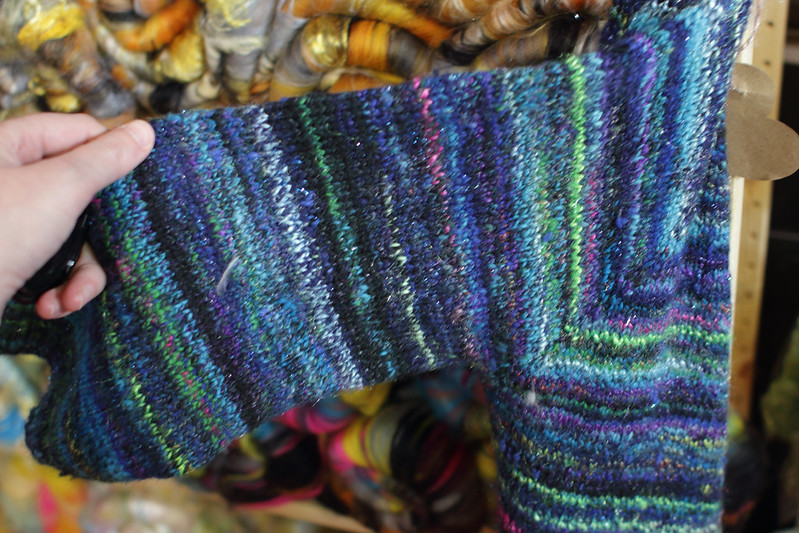 This cardigan sample from Spin City is proof that you can knit whatever you like with your misfit handspun. 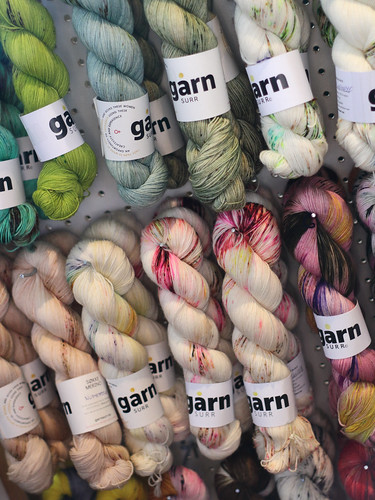 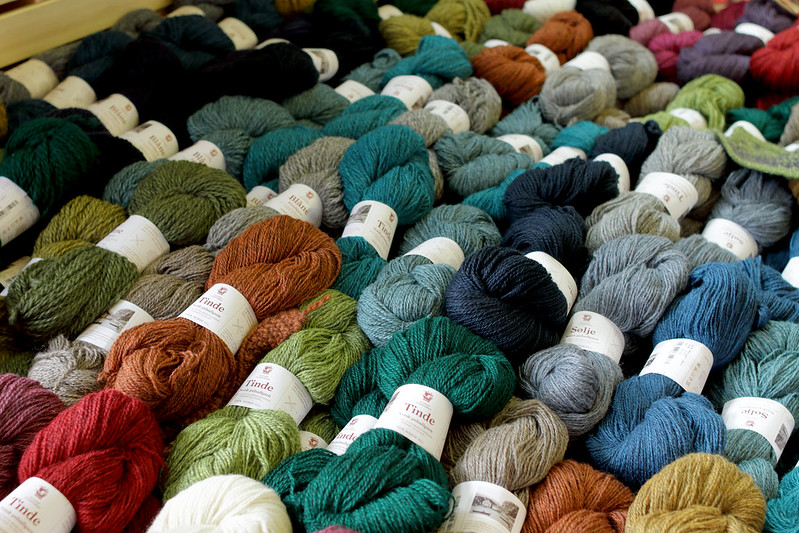 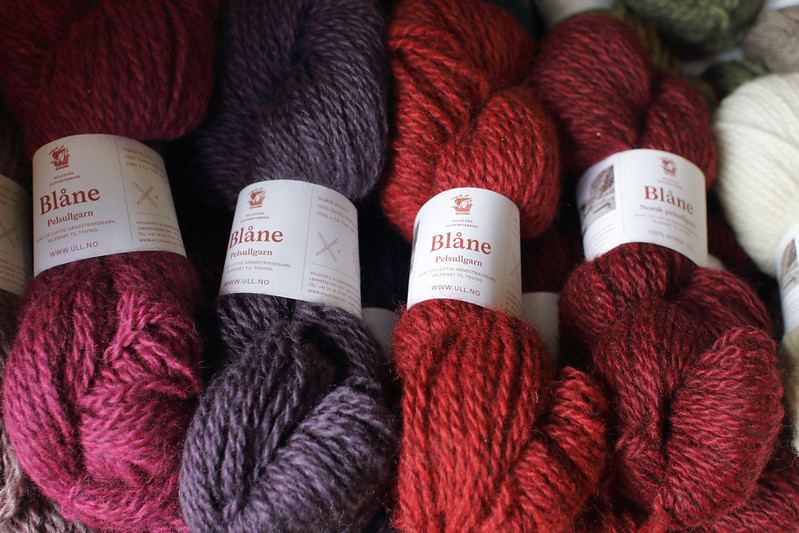 Our final port of call in the Great Hall is East London LYS Knit With Attitude, who brought a fine selection of Norwegian yarn. Among this was their last ever consignment from Garnsurr, a dyeing social enterprise which has sadly been forced to close. I absolutely loved the deep colours of eco wool from Hillesvåg Ullvarefabrikk.

Countess Ablaze‘s riot of colour in the Great Hall well deserves a mention, but instead of taking photos I got talking to an Instagram friend after recognising her epic invaders cardigan!

My thoughts on the festival as newcomer are that they had worked hard to bring together a really good variety of aesthetics and crafts. The venue was very nice, and although my journey was long (around 2 hours each way) it was very easy, and there was no shortage of like-minded knitters to chat to on the train (thanks Annette, Anna and Eli).

Although the venue is something of a warren, in general the spaces were well thought out and visitors could circulate easily. However the two upstairs rooms that I could not photograph were a squeeze at best, and parts of the Great Hall were cramped. The good-natured crowd helped make it bearable, unlike other events I can think of (Knitting & Stitching Show I’m looking at you).

I’m still suffering from vertigo/dizziness and exhaustion following health problems at the start of the year, and I knew that a busy yarn show would be a challenge. I made the last minute decision to go after reading on the Unravel website that there would be ample seating, as well as a quiet room to make the event easier for neurodiverse visitors. These efforts are really important for people with long term access needs. Unfortunately, when Therése and I needed to take a break (she has also been feeling less than 100%) our only option was the floor in an outside marquee. I also learned, from someone who really needed it, that the quiet room was not exactly quiet. This is unfortunate, and I hope the organisers will improve on this next time.

Despite finding the day a bit of a struggle physically, I really enjoyed the event overall, discovered some fantastic makers, caught up with friends and stashed a lovely skein!

The Project RoomFirst steps in Macramé