Over the last couple of years there has been a definite change in my approach to knitting and making in general. I have become far less easily seduced by interesting-looking techniques and details, and much more focused on filling the gaps in my wardrobe and creating things I really need. Of course, that doesn’t mean that they can’t be technically and visually interesting, just that they have to also be functional, wearable, well-fitting and suit my style. Sometimes that means that the process might be a bit of a slog, as was definitely the case here, but the end result is everything I hoped it would be. 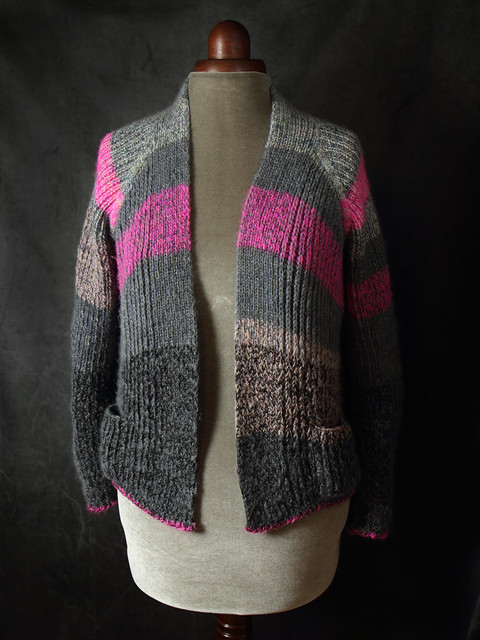 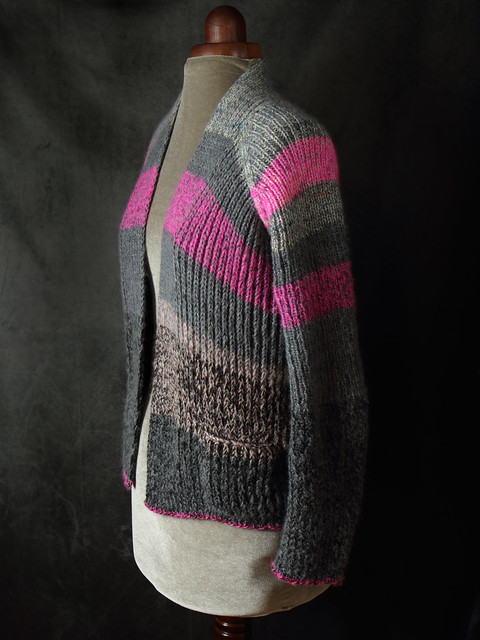 The I used was Flaum by Justyna Lorkowska. I chose it for its draped front – a style I wear a lot, its seamless construction, its stretchy brioche and rib, and pockets! Beyond those elements, I made significant mods and used the pattern as a blank canvas for my own flights of yarn fancy. Here’s the project page on Ravelry.

The sizing choice was a tricky one for me. The sizes are based on bust measurements only, and although the pattern PDF gives some garment measurements it does not give suggested ease and there is no cross shoulder measurement. My bust measurement of 40″ puts me squarely as the L size, but I often find that raglans look saggy on my narrow back and shoulders. Additionally, the sample photos of this garment appeared to have extra bulk at the front underarm which I definitely wanted to eliminate. I followed the M size, gambling that the brioche would have enough stretch. Luckily it was the right choice because ripping fluffy yarn is no fun at all. 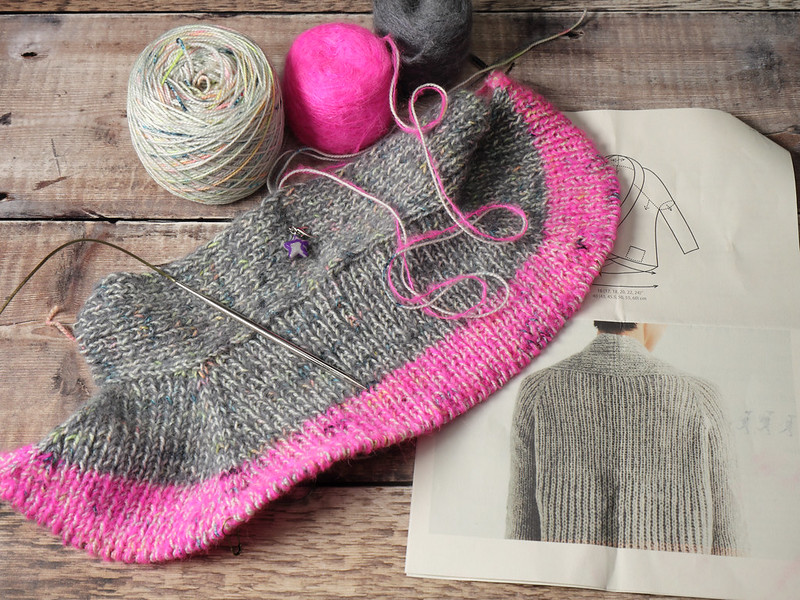 The garment construction is very interesting; a top-down raglan with stitches picked up from the neck band, as you can see above. From then on the neck band is integrated, with short-rows used to balance the difference in row tension between rib and brioche. I believe that my first mod was to reduce the width of the neck band to help it sit better on my shoulders (but I forgot to note that down). There are over 1000 projects for this pattern on Ravelry and it’s well worth having a look at other people’s mods if you’re considering it.

My other structural mods:

The mods that I’m sure you’re most interested in are the colours. 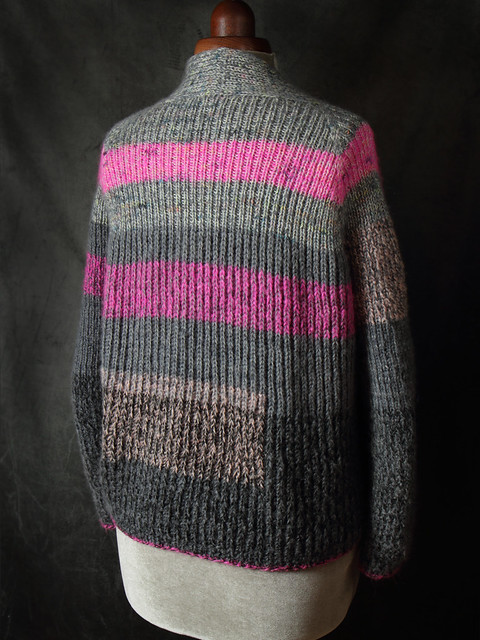 When I cast on, I didn’t really have a plan other than that I wanted an ombra effect and some neon. I used a light-coloured shade of Favourite Sock (‘Frosted Sunrise‘) for the top part, then mid grey ‘Southbank‘, followed by ‘Black, Like My Soul‘ at the bottom. These shades were held together with Fuzzy Lace, for the most part in grey ‘Coal Dust’, but the rest was made up as I went along. The fluoro pink blocks and edges are ‘Be Safe, Be Seen‘, and the lighter pink band and intarsia panel are ‘Baby Cakes‘.

Even though it was my only active project and despite working on it almost every day, the cardigan took me an incomprehensible 5 months from start to finish. This is entirely down to brioche being an absolute slog, even making 1×1 rib seem speedy by comparison. It also burned through a lot of yarn. So much that I lost track, but I’m pretty sure I had to break into second skeins of the black and grey shades of Favourite Sock, and pulled rather more Fuzzy Lace from the stock cupboard than intended.

The finished garment is so light and warm. It works with both jeans & t shirt and dress & leggings combos I wear most often. Since most of my clothing either black and grey or bright, it pretty much goes with everything, while being totally unique. And it has pockets. What more could I want?