Knitting bobbins are little (usually) plastic frames that allow yarn to be wrapped round and hang securely thanks to a little hook. They come in handy for certain kinds of colour work. Either:

While not essential for fair-isle style colour work, bobbins can help avoid unravelling balls and tangles. They really come into their own for intarsia, avoiding the need for separate balls of yarn. 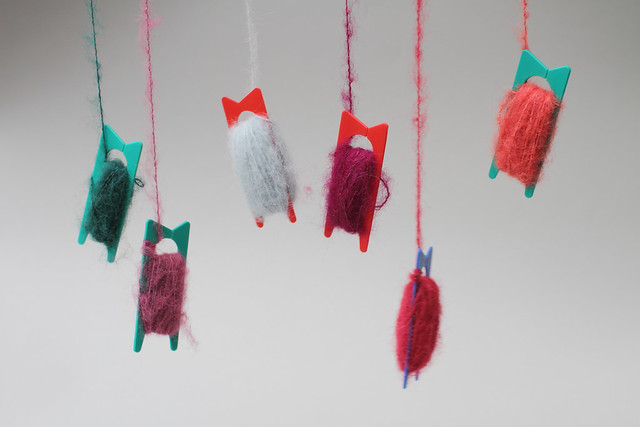 For our Cauldhame Scarf pattern, both statements are true. Each row is worked with six colours, and a total of seven strands, using a combination of marled knitting and intarsia. It’s difficult to imagine attempting the project without bobbins and it probably wouldn’t be a fun experience!

I recently had a great question from Raveller PippaJB using bobbins for my Cauldhame Scarf pattern:

“It’s the first time I’ll have worked with bobbins, and I was just wondering how much yarn I should wind on to each one?”

To answer PippaJB’s question first of all: Everyone knits differently but for me the right amount of yarn was 3-4g on a bobbin.

Rather than putting all the yarn you need on the bobbin at the start, it’s much better to keep the bobbins light and re-load them several times. Why? Overloaded bobbins cause uneven tension. Unlike knitting from a ball, the full weight of the bobbin is pulling on the working yarn at all times, so stitches are pulled much tighter when the bobbin is heavy then when it’s nearly empty.

I also found that my knitting was much slower with heavy bobbins, and they were more likely to get tangled up and to unravel. Yes, there will be more ends to weave in and you’ll have to stop to re-load bobbins, but life is easier and results better with lightly-loaded bobbins.