2009 was an eventful year. I got a new job, I re-launched my old music website, I knitted 36 things, I got two new bikes and rode them lots and of course, knitted with Kelley Deal at ATP! It wasn’t all good though, our little black cat Aduki, who you may remember as the Yarn Health and Safety Officer, has been missing for two months, which is incredibly sad. 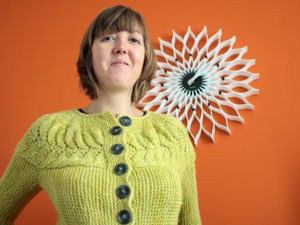 I have used 86 balls of yarn from my stash, better still I have sold 110. I have knitted some very successful projects from my stash, like Ysolda Teague’s Vine Yoke Cardigan.

However, I’ve acquired a shocking 169 balls of yarn. Mostly bought, but some gained through my newfound love of spinning and dyeing. It’s not helped either by my current taste for finer knits (half of my 2009 projects were in 4 ply), which take ages and don’t use nearly as much yarn. Overall, there’s a stash reduction but this is hardly a victory, I must do better in 2010.

As the ugly graph shows, I was pretty good for the most of the year but I had a few moments of weakness, mostly driven by sales so at least it was cheap and I have a lovely selection to start 2010 with. I’m quite pleased with the half-price Debbie Bliss Rialto and Rowan Bamboo Soft I just picked up from John Lewis and Liberty! 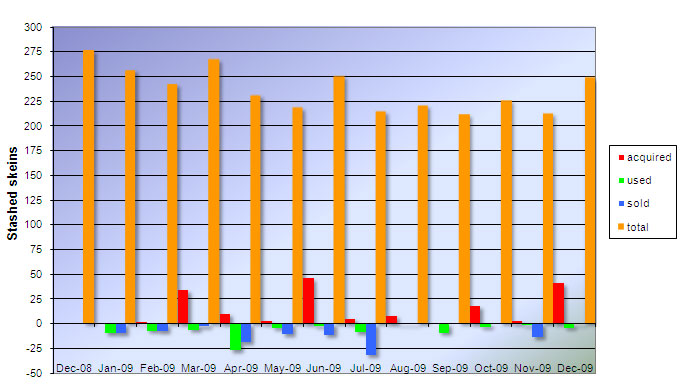 I finished two of my long term UFOs in early 2009 which was great but after that I lost momentum and I’ve still got three of those from 2008 remaining and I’ve gained another two. I set myself a ridiculously ambitious gift knitting schedule in autumn which I almost managed to stick to, to the detriment of UFOs and design work. Much as I love it, I need to do less gift knitting in 2010 if I’m going to finish the big projects. 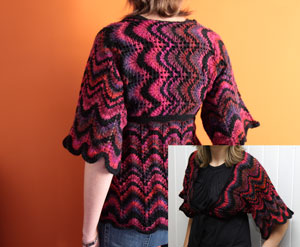 Aside from the lack of time I’ve had for designing, my other resolutions have gone well. I’ve knitted a fair bit of lace and fairisle (I still can’t do that holding one strand with one hand and the other with the other thing, maybe one day). I’ve knitted practical garments that I love and wear lots, and even managed to turn the odd failure into something useful.

I’m hoping to focus on design and get some more patterns published, maybe some commercial ones. I fell out of love with a complex design project I was working on over the summer and found it hard to get back into it, but now I’m raring to go!

The Project RoomKnitting with Kelley Deal at ATP