You may remember from my last post that I was having a lot of problems with my sewing machine with snapped needles, bad tension and jamming. To cut a long story short, I welcomed this monster into my home a few weeks ago: 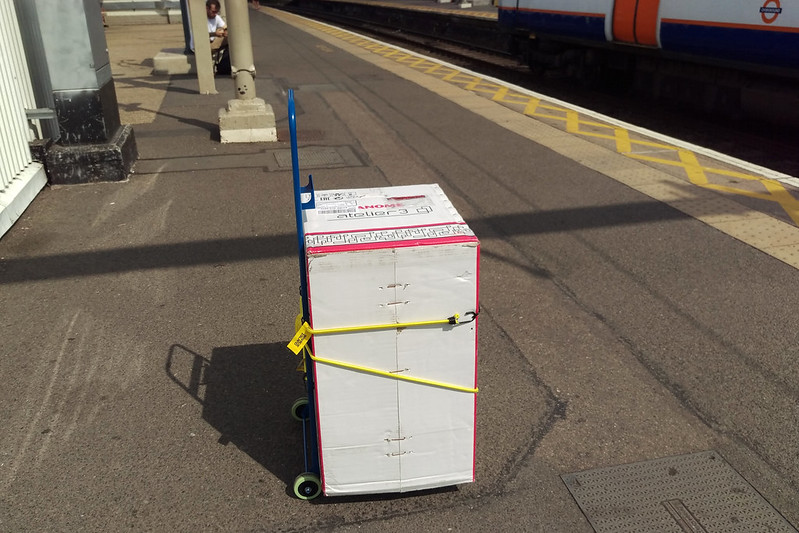 It was quite a journey – and I don’t just mean lugging it home on public transport – more of a voyage of sewing machine discovery.

My existing machine is an Elna 2005, a fairly basic mechanical model. I have done a lot with it despite never feeling like it was on top form, including making a bespoke wedding dress. I had put off getting it serviced because that previously meant hauling it right across London. Thanks to a recommendation from my friend Anna of London clothing label Phannatiq, I discovered the Maury Sewing Machine Company in Bethnal Green, just a few stops on the train from me in Walthamstow. The team at Maury were so welcoming and helpful, despite me being a private customer and their main business being industrial machines. They don’t have a showroom but took a lot of time to tell me about the machines on the market. They also make a great cup of coffee.

To my surprise, they considered my humble Elna to be a pretty sturdy piece of kit (it is kind of heavy for its size), and the fact that I’ve never found so suggested there was likely something wrong. Sure enough, they found that a screw had been left undone, probably from a previous service, which accounts for the broken needles. Sadly, the buttonhole feature was beyond repair. They offered to set the machine up to use for straight stitch on thicker fabrics (I had absolutely no idea it was possible to ‘tune’ a domestic machine for a particular purpose), and we had a long chat about kind of machine might suit my needs better.

For me, this was easy –in the past I’ve done patchwork, furnishings and bag making, right now I’m all about the fashion sewing (OK, and maybe the occasional pair of curtains). I sew everything from floaty silk tops to winter coats and I’m interested in using more stretch fabrics. I don’t need the machine to be portable, I am not a beginner, I want to up my output and invest in a piece of equipment I’ll have forever. This gives me a really clear set of requirements: a workhorse with fast, accurate straight stitch on a wide range of fabrics, plus zigzag and reliable buttonhole facility. The buttonhole facility might seem like an extravagance, as these can be done manually, but I know this is important to me. I have no had one for the last few years and it has affected my enjoyment of sewing, making me reluctant to take on some projects and finish others.

Industrial or domestic? Computerised or mechanical?

I considered every option here. Industrial sewing machines are (as you would expect) designed high-output continuous use. They have integrated tables, they’re heavy duty, also just heavy! They’re generally dedicated to a single application, be it straight stitch, finishing edges, sewing leather. Maury had available an unusual model that does one that does, straight stitch, zigzag and buttonholes, which would have been a great option for me if I had the space for a dedicated table.

I was loath to buy another mechanical sewing machine and hit the same problems I’d experienced with my Elna. I grew up using a very old Singer with a retro-fitted motor, and then a Pfaff from the 1960s, which I used until it began emitting sparks(!) about 10 years ago, both were built like tanks! I were to get another mechanical machine I would look for a vintage.

So what’s the difference? With mechanical sewing machines, every single stitch pattern and feature is controlled by gears and moving parts – the more complex, the more fragile, more expensive and the less reliable. It is no wonder that a complex function like an auto-buttonhole is normally the first thing to break when it is controlled entirely mechanically. By contrast, adding more stitches to a computerised machine is just a matter of software. There are fewer moving parts, they are simpler and can be made stronger and can be built with powerful motors (although they aren’t always). A complex feature like an auto-buttonhole is trivial because, once again, it’s programmed in software.

After talking to sewist friends, I discovered that computerised machines have other neat features, like automatically stop with the needle in the up position (or down, if you need to pivot on a corner) and automatic lock stitches. I added these to my list of requirements, as they’re both points of frustration with my current machine.

Maury Sewing Machine Co. is a Janome dealer, and I had heard great things about the Janome brand, so that part of the decision was easy. Knowing that I wanted a Janome computerised sewing machine, narrowing it down to the right range and model should be simple, right? How wrong I was! There are lots of ‘buying guides’ out there like this one from John Lewis, which is clearly laid-out and explains basic features, but is very much aimed at beginners. Janome offer four different series of computerised machines, and, while several models were aimed squarely at quilting or machine embroidery, the remaining models had such similar sets of features I struggled to differentiate them. Seriously, Janome, please improve your marketing materials! (I didn’t find any suggestion that other manufacturers were better at this either.)

The retailers I contacted were only able to regurgitate the information from the manufacturer website, so I can only imagine that most customers are left having to base their purchase decision purely on price (as I did when I bought the Elna), which is a great shame.

I read every bit of literature and watched every video and I was curious about Janome’s Atelier series (known as ‘Skyline’ in the US).  These solid-looking machines have a longer arm space, and buried the PDF brochure I found, mention of the kind of features I was looking for:

“We know that reliability is the most important feature. […] you can be confident that it is up to any task – from stitching the sheerest silks to the thickest quilts and sandwich layers.”

That’s more like it! The Atelier series are expensive machines with a more limited features set than some of the cheaper models, which does suggest superior build quality (although this isn’t discussed anywhere). The Atelier 3 is the only model of the series within my budget.

Obviously, the best way to decide if a machine is right for you is to try it out. Unfortunately, I couldn’t find anywhere locally (and I mean the whole of East and Central London!) that had a good range of computerised machines for demo, and not a single store had an Atelier model. Maury had no experience of the Atelier 3, but agreed that it sounded like what I was looking for. They suggested looking at blogger reviews, and kindly offered to order one in if I thought it was the right machine. I found a number of reviews from experienced sewists who had been loaned review machines by Janome, like this one. The reviews were excellent, very genuine and factual, covering a lot of practical detail not mentioned in the brochures. I was sold! 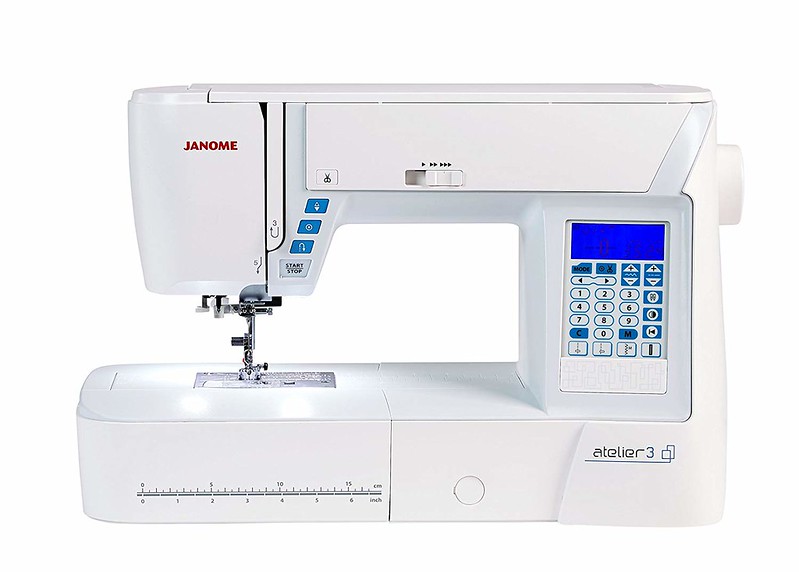 It arrived a few days later in an enormous box, which I bravely carried home on the train. Elna 2005 box on top of it, for comparison: 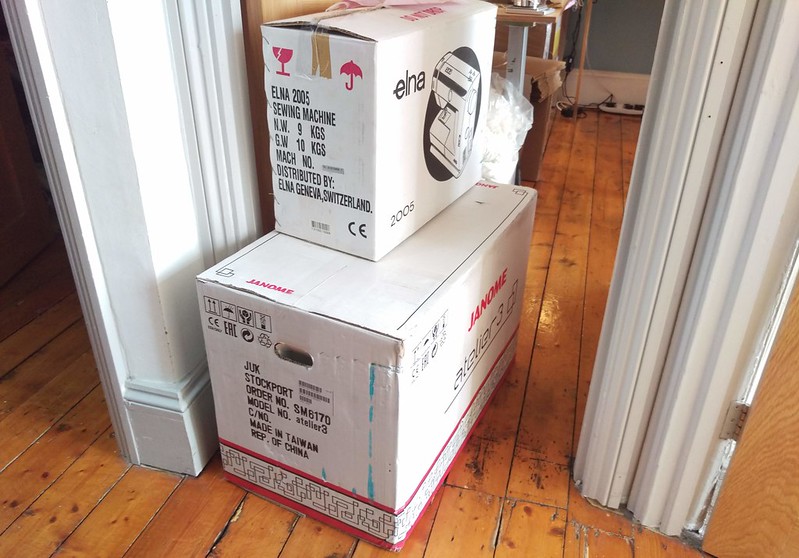 It was immediately put through its paces with a new sewing project (more about that next time). 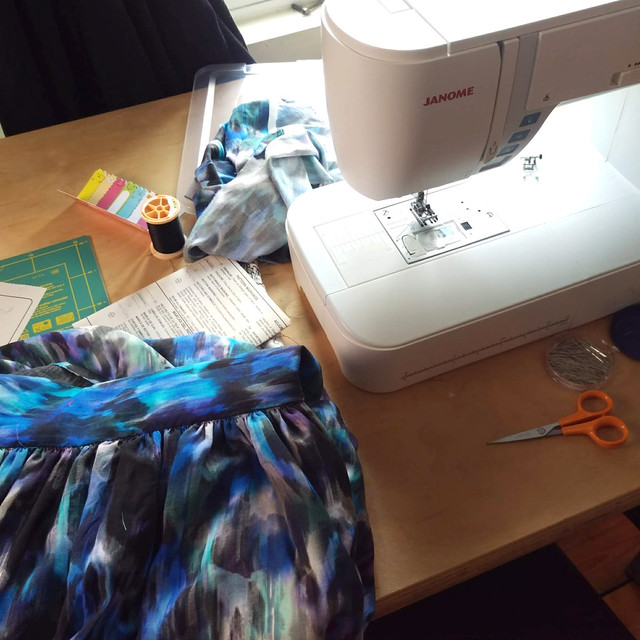 My thoughts so far: It’s amazing, I love it. I completed this project in four days when my last few had taken me more like four weeks. It’s not just the hours I’ve saved not having to unpick jams, it’s all the features I never realised I needed, like an automatic thread cutter (it even ties a knot for you!), start/stop button and speed control. I don’t feel qualified to review it just yet, but I am seriously impressed.

The Project RoomSwag from The Knitting & Stitching Show