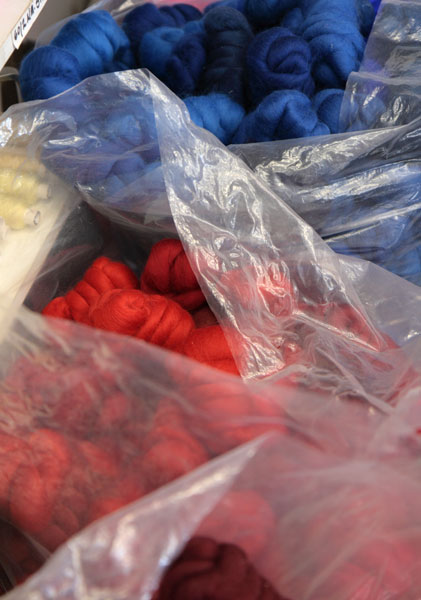 I’ve wanted to try my hand at spinning for some time – knitting a garment from scratch is pretty cool but knitting something from your own hand-spun yarn is a whole other level. There are the obvious advantages of being able to extend the creative process to yarn, getting the exact colour combination, blend and texture I want (well, maybe with a bit more practice). Also, I’m much happier knowing where fibre is coming from – with manufactured yarns it’s often unclear. As with supermarket produce it can be originated in one country, spun in another, packaged in another then shipped halfway round the world before landing in your stash. Starting with the raw fibre, you’re cutting out a lot of those stages, and if you want to you can narrow it down to the farm, or the exact sheep! 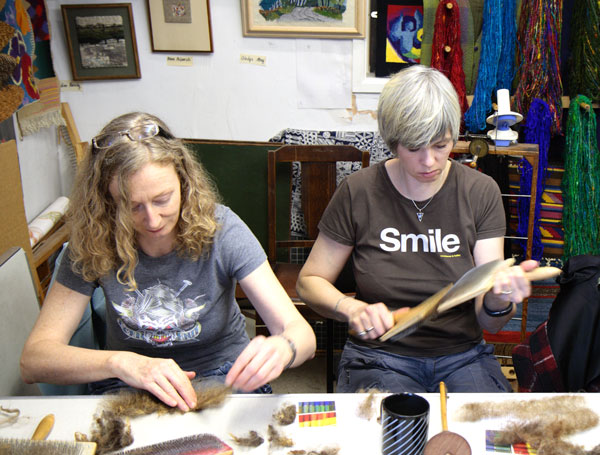 So, I booked myself on a spinning workshop at The Handweavers Studio. The course cost £45 which is very reasonable when compared with other beginners courses in London. By happy coincidence, Laura and Lauren from Stitch and Bitch London were among the four others taking the course. 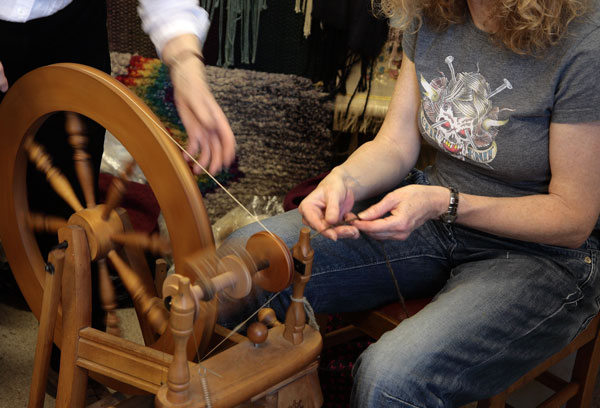 Spinning on a wheel

We started off learning to use a drop-spindle with unwashed fleece from a sheep called “Big Pat”. It was oily, smelly, and full of bits – but to my surprise, spinnable. At first the thread broke often and I kept dropping the spindle but, as we started combing and carding (using spiky pads to align the fibres) it spun more evenly. We prepared ‘rolags’ (carded fibres made into rolls) for spinning on the wheel later on. 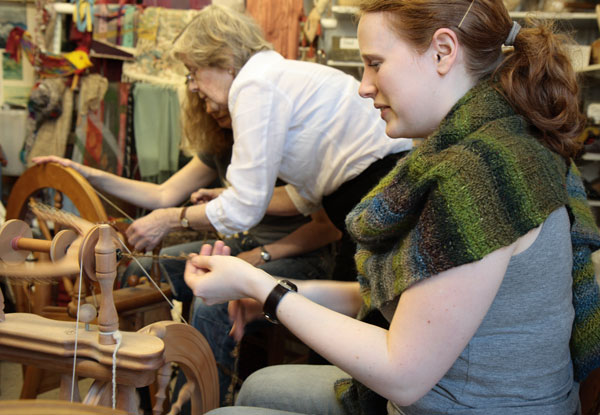 Laura plying strands together on the wheel

We got a wheel each in the afternoon, and there were a good range of different ones to try, traditional and modern-looking. I had never treadled before, but I got the hang of it in less than a minute. Using a spindle, much time is spent stopping and winding on the yarn, but the wheel does the winding and spinning at the same time so it feels much faster. It is just as tricky (for me anyway) to get an even thickness of yarn, however! I found the wheel difficult to adjust – there should be a sweet spot where the twisting and drawing of the yarn onto the bobbin are in balance.  I couldn’t get the balance and ended up with too much twist in places and not enough in others. I’m guessing this is something that only improves with practice and familiarity with the wheel.

After a bit more spinning, I had a go at plying together my ‘singles’ from the wheel and the spindle into a stable 2 ply yarn. (‘Ply’ in spinning terms refers to the number of strands used to make the yarn, typically 2 or 3, rather than the British ‘ply’ system describing yarn weight). As separate strands, hand-spun singles are unstable, and have to be spun together to make a usable yarn. This is something I hadn’t thought about before as single ply yarns like Noro Kureyon and Malabrigio Worsted are commonplace for knitters – special techniques are required to produce stable singles. 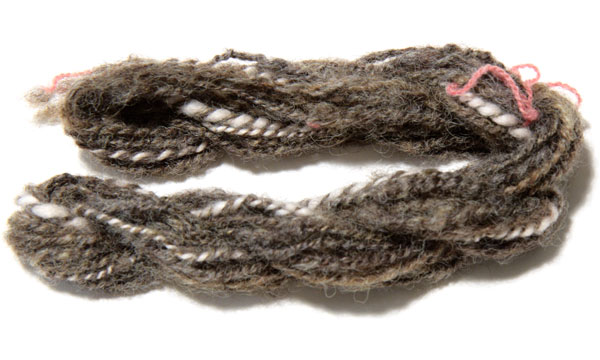 I was left with some smelly, lumpy, but knittable, actual yarn – yay!

I was also left with the beginnings of a spinning addiction. I bought a drop spindle, some carders, some dyed merino tops in striking pink and purple shades, and a handful of Blue Faced Leicester (not a cheese, rather a British sheep breed with long, soft, white fleece) to play with. I have well and truly got the spinning bug!