Spinning: what happened next 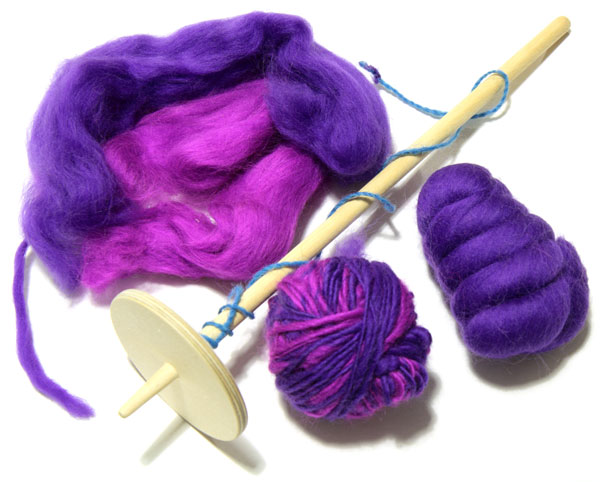 A lot can happen in a few days in the business of spinning. I’ve been playing with the bits and bobs I bought following my spinning beginnings at The Handweavers Studio. The fibre is a dream to spin compared with the unwashed fleece used in the workshop, making the carders I bought superfluous, but I’m sure they’ll come in handy soon.

For my first attempt with the new spindle I combined the undyed Blue Faced Leicester with dyed dark purple merino tops. Holding both fibres together worked OK but was unnecessarily tricky as I was concentrating too much on drawing even amounts of each fibre. However, I spun 40 m of it and didn’t break the yarn or drop the spindle once.

I made another strand to ply with the first, using two shades of purple dyed merino, but alternated between them rather than trying to use both at once. This went much better – my yarn was a little thick but fairly even, and I got some lovely Noro-esque graduations from alternating shades. 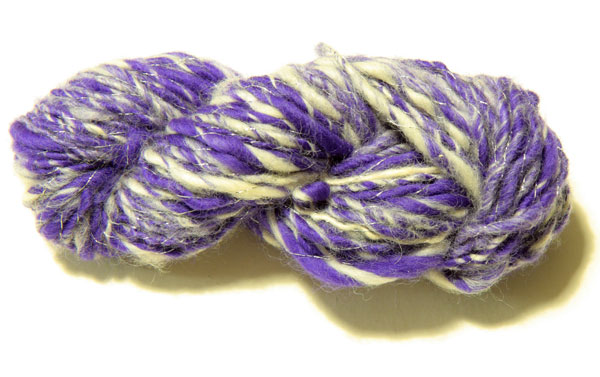 Then came the plying, this didn’t quite go as planned. Plying on a spindle is really really slow. Not only that, my two singles looked ugly together so I unraveled and went to plan B, plying the white  merino and BFL mixture with that silver lurex thread. A successful rescue – the result is rather pretty!

I learnt a few things from this – plan the finished yarn properly, thinking about the colours; keep it simple; and… this would be much easier if I had a spinning wheel. I also discovered that I really really like spinning, so investing in a wheel is not such a crazy idea.

Choosing a wheel turned out to be quite tough, there are a bewildering array of things to consider. There are some excellent reviews of wheels in the spinners’ groups on Ravelry and an article listing the specs of most available wheels in Spin Off magazine (log in required but registration is free). Abby Franquemont’s article ‘Choosing your first spinning wheel’ helped me clarify what I should be looking for and to hone down my particular requirements: versatility (a good range of speed ratios), compact or folding (space is a major issue), modern looks (it sounds shallow, but my boyfriend has to live with it too, and that rules out anything that looks like it’s from a period drama). 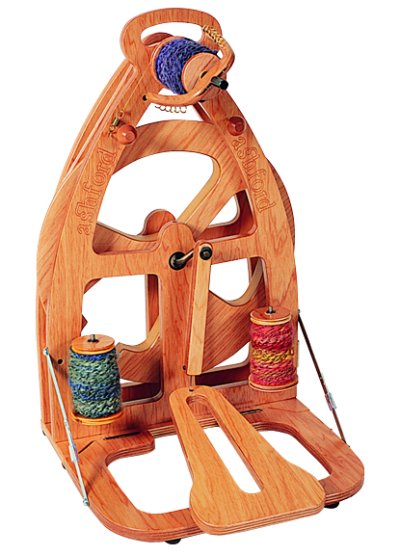 I narrowed it down to a shortlist of three wheels: The Ashford Joy, an unusual shaped, very compact wheel from New Zealand with a wide range of ratios; the Kromski Sonata, a full size but folding, upright wheel from Poland that comes with a carry case; and a British made Herring spinning wheel, the cheapest of the three, a compact, traditionally-shaped wheel made of laminated beech.

It was a tough decision because they’re all great wheels and I’m sure I’d be happy with any of the three, but I went for the Ashford Joy as it best fit my requirements. Not only that, spares are easy to come by in the UK, and I would have no trouble selling it if I ever wanted to. The best price I found was at Wingham Wool Work, for £273 with free delivery and a £25 voucher for fibre. With the weak pound, it was hard to find good deals on non-UK made wheels, and I expect this will worsen as shops here sell their existing stock and have to import new ones at a higher price. There would have been many more options open to me if I was in the US, such as the very cool Schacht Ladybug.