Learning crochet is something I have tried and failed to master three times now. Three patient teachers have attempted to introduce me to the granny square and yet I still can’t even cast on (is it even called casting on?) a row successfully.

But I may have just learned crochet inadvertently. A few weeks ago I saw my office buddy and fellow crafter Sardaana working on an interesting-looking project using a mysterious technique, the output of which was a snake-like tube made of beads (here’s one she made earlier). She kindly offered to teach me, so I dug into my (somewhat excessive for someone that never uses beads) bead collection, and, after an initial round of swearing, a discernible tube began to take shape.

The beads were given to me by my mum when I was a teenager and as far as I know they came from a broken African necklace. It’s hard to capture what they look like in a photo but they’re very dark and glittery. I used sterling silver findings from Ebay and Etsy. 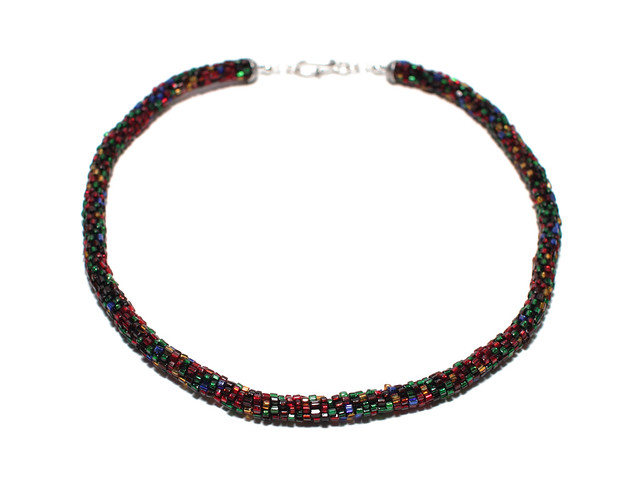 Although it looks painstaking, it is a simple and rewarding technique. Once I have mastered it, which definitely isn’t right now, I will publish a tutorial. But for those of your with a working knowledge of crochet, the basic idea is this (apologies for not knowing the correct terminology): 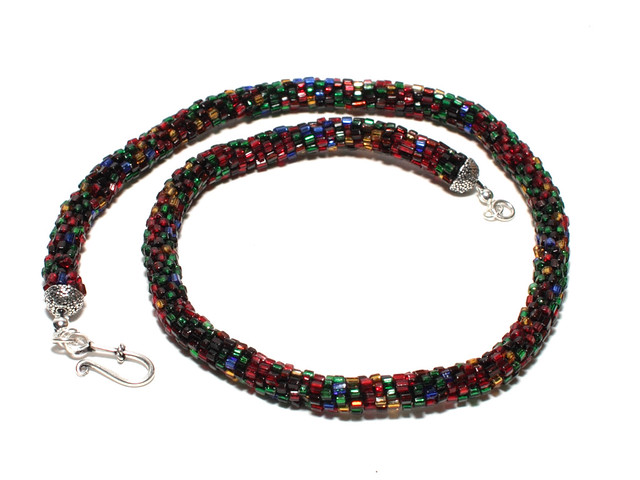 Size 8 seed beads would be a good choice for this. My beads, being (I assume) handmade, were all different sizes, which made working my first project more difficult than it needed to be. You can also make life easier for yourself by getting a quality crochet hook with a flat handle.

I used number 16 crochet cotton in black (again, not the best colour choice for a first project) and a 1mm crochet hook. My patient teacher prefers number 20 crochet thread and a 0.75mm hook.

I have already started my second project using iridescent round beads. It’s turning out great, much more uniform than the first and a completely different, bobbly texture. 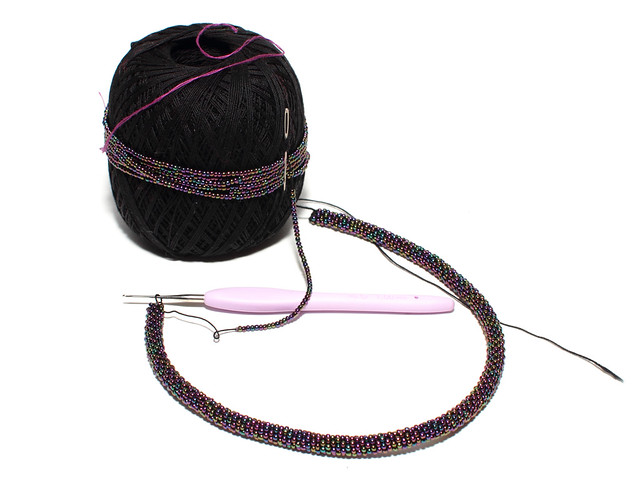 It’s going so well I am considering having another go at crochet proper! Even if that fails, I’m delighted to have finally found a use for my bead stash.